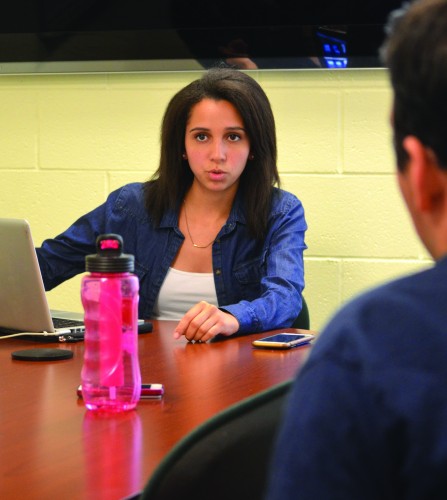 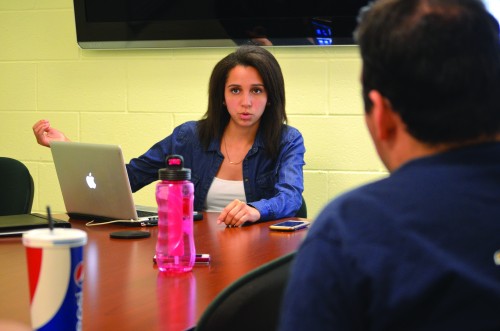 Banks, a sophomore at the time, had already filled out the necessary paperwork to begin her campaign — which was scheduled to start the following day.

But when she went into the SGA office to give then-President Matt Desilets her paperwork, she informed him that she didn’t want to run. She asked to be taken off the ballot, because she wasn’t sure that she could take on the extra responsibility.

On her way out of the office she saw current student body president Jonny Atkin.

Banks told Atkin that she decided not to run, so he pulled her into an office to try and change her mind.

“I sat down with her and just told her, ‘Lindsey, you are perfect for this position,’” Atkin said. “She’s someone that listens more than she talks, and she’s always trying to find solutions to problems people have. I wasn’t going to let her back out.”

Then Carly Hviding walked in, and began encouraging Banks in the same manner Atkin had. The meeting lasted for about two hours. When it was over, Banks had to decided to run once again.

“I wouldn’t be in SGA if it wasn’t for them,” Banks said.

Fast forward to a year later — during April of 2015 — and Atkin and Hviding again found themselves encouraging Banks to run for another SGA position: Vice President of Student Experience. The position was new, resulting from the split between SGA and SPB last March. Both Atkin and Hviding had no doubt — based on her involvement in SGA from the prior year — that Banks was the right choice for the job.

This time, Banks needed no convincing. She wanted to run.

“I always knew I wanted to be more involved, I just didn’t necessarily know where,” Banks said. “When this position was created I knew it was perfect. Everything I’m really passionate about, I thought it was encompassed in this position. It was kind of right there in front of me.”

As the first-ever vice president of student experience, Banks is responsible for trying to find ways to engage the student population.

“My vision is that, at least once a week, we will be having some sort of conversation with the student body,” Banks said.

One of her main priorities is running the “We are Quinnipiac” campaign around campus.

“I’m kind of the messenger,” Banks said. “I’m the one who puts the wheels in motion, and kind of puts things into the right places so that everything we want to accomplish can happen.”

She is also leading a statistical-gathering initiative, directed toward finding creative ways to survey as many students on campus as possible. With this data, SGA has the ability to approach the administration with more accurate data.

“She’s got the perfect combination of social intelligence and analytical intelligence,” Atkin said. “She can look at some survey results and find a trend, or she can listen to somebody talk and key in on broader, important points.”

“I can’t think of anyone who cares about the students more than her,” Hviding said. “It’s almost as if Lindsey [Banks] encompasses this new position, and the position encompasses her.”

One of the most challenging things for Banks is the realm of uncertainty that comes with a new position. Unlike most other SGA members, Banks has nobody to go to for advice, and no blueprint to follow for a daily operation.

What she does have is other SGA members, which have formed a committee under Banks to help try and enhance student experience.

“It’s kind of up to me and my committee to form this position and decide what it will be in charge of in the future,” Banks acknowledged. “It’s a lot of brainstorming and planning, kind of paving the way for the future.”

“Without the members of my team, I wouldn’t be able to do any of this,” she added.

In the future, Banks hopes to offer a more accurate portrayal of the entire campus, including people of all sorts of interests. In a broad sense, she says, it’s her largest goal.

“If there are people here feeling like ‘[SGA] isn’t doing anything for me,’ then we need to do a better job,” Banks said. “That’s why this position was created. We’ve always been an umbrella over the student body, but a lot of what we’ve accomplished has been for student organizations. I want to engage everyone.”

And her peers have no doubt that she’s the right person for the job.

“I know that putting such an important development in her hands is going to be just phenomenal,” Hviding said.

“It’s going to be fun watching Lindsey [Banks] and her committee,” Atkin said. “I have no doubt that she’s going to make big strides and provide the framework for this position for years to come.”