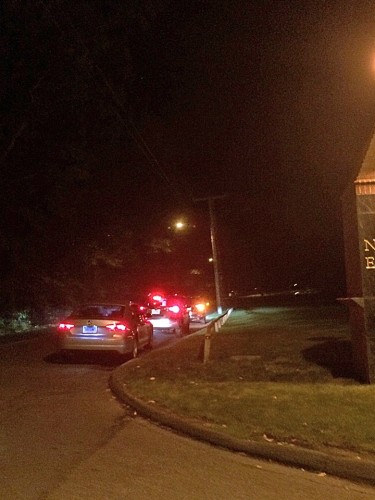 Uber cars line up outside of the New Road entrance to the Mount Carmel campus.

Students will now be able to catch an Uber safely after the Department of Public Safety’s decision to allow them on campus, according to the Chief of Public Safety Edgar Rodriguez.

This change in policy is not fully in effect yet, but Public Safety is working to allow students to meet their Uber driver in the carpool lot adjacent to the guard booth on the Mount Carmel campus, according to Rodriguez. He said this change comes after realizing students were still using Uber by catching them off campus.

“I know for a lot of our students Uber is economical and it is being used worldwide,” Rodriguez said.

Rodriguez said even though Uber drivers will be allowed on campus, he recommends students use Metro Taxi.

“Metro Taxi is a professional organization that has marked vehicles, are insured, all taxi drivers have a public service license and the vehicles have a security camera in them,” he said.

General manager for Uber in Connecticut Matt Powers said Uber has experienced tremendous growth within the New Haven area since the company expanded to the state in April 2014.

“[Uber] is popular typically among college students because it is safe, reliable and convenient to use, especially when you don’t have a car and you need to get into the city,” he said.

Powers said it is important for people to not compare Uber to a taxi service.

“I think it’s an important distinction to make because many people assume it’s a taxi, but it’s a new innovative option for transportation that anyone can use,” he said.

Uber recently won the dismissal of a lawsuit by 15 Connecticut taxi companies because it could not be proven to be competing unfairly with taxi services.

Rodriguez said he has some issues with Uber’s safety, especially the fact that Uber cars are not marked.

“[Public Safety] is more concerned about students who are leaving the nightclubs late at night and are trying to catch an Uber,” he said. “Sometimes we aren’t as sober as we ought to be during these times and then we jump into the first car that looks like an Uber.”

Powers said Uber takes pride in the safety of their app because of the information a user is able to receive about their driver.

“There are all sorts of features on there that can help make Uber one of the safest transportation options out there,” he said. “You can share the ride with friends and as a user you can see your driver’s photo along with their contact information, license plate and the make and model of their vehicle.”

Rodriguez said when using an Uber it is important to make sure you know your driver’s name, car model and license plate number before hopping into a vehicle. He also recommends students share an Uber with friends or download the Rave Guardian app to track your location.

“Our biggest concern is the safety of our students,” he said. “At least 75 percent of our Public Safety officers are parents, so we treat [students] like they’re our own kids.”
Editor’s Note: The Matt Powers interviewed in this article is not the Class of 2016 Student Government Association president.