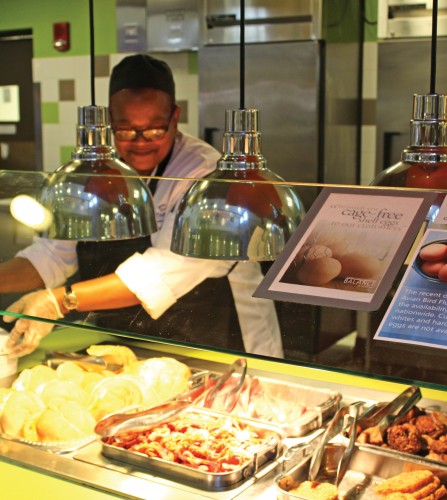 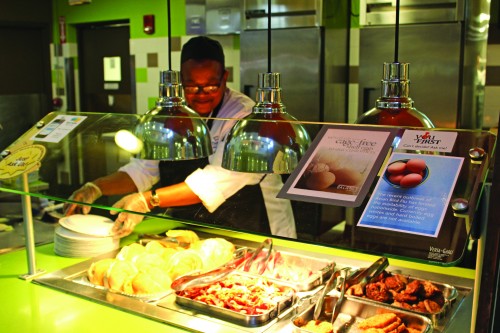 Students may not be able to enjoy their usual breakfast at Quinnipiac if that meal includes hard-boiled eggs or egg whites.

The university is experiencing an egg shortage due to avian influenza, or bird flu, afflicting millions of chickens across the country. Certain dishes such as the hardboiled egg and egg whites will not be available for the entire year because of the outbreak.

Associate Director of Dining Services Leean Spalding said the bird flu epidemic of December has caused the food industry to cut down on its use of eggs in general.

“I just wanted students to be aware of what’s happening and why there’s no egg whites and why there’s no hardboiled eggs at this point,” Spalding said. “And maybe in the future it may impact more items. Right now we’re okay but the school year has just started.”

Sophomore Sarah Bolock said that she was not aware of the shortage, but was more concerned about the long lines for the egg products available.

“My big problem is the lines to get eggs. That’s the only problem that bothers me,” Bolock said.

Since Quinnipiac receives its eggs from Texas-based company Cisco, the school could potentially lose even more egg-based products if the vendor cannot supply them.

Texas’s H-E-B supermarkets have limited the cartons of eggs one can purchase to keep prices the same and fast food chain Whataburger has limited its breakfast menu to certain hours among others, according to ABC News.

Due to the nature of how avian flu affects birds and food production, more than 47 million chickens have been euthanized. Since it takes 12 to 16 months to raise a chicken, who lay one egg per day, the shortage will happen for a while, according to Spalding.

It’s important to note that other egg products such as egg sandwiches and eggs on the grill are still being served regularly, according to Spalding.

“Right now we have whole eggs, we have cracked eggs… as of now we can’t get egg whites or hard boiled eggs. So we’re just eliminating those from the menu because we don’t have an option for that,” Spalding said.

Bolock said that while she does not have strong feelings toward the lack of hardboiled eggs, she would be disappointed if more egg products are eliminated from the menu.

“Hardboiled eggs kind of smelled nasty so I don’t like them lying around. And egg whites, not really a problem for me… I would miss omelettes though… I like those,” Bolock said. 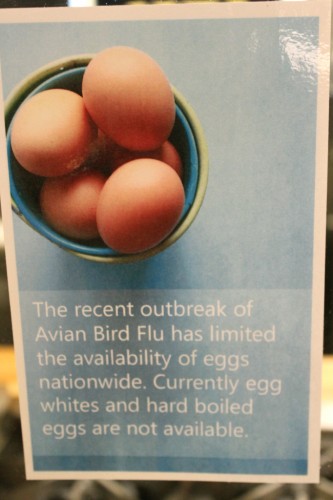 In the meantime, Spalding said the cafe might be introducing a new product called “Waffle Waffle” that is partially due to the egg shortage in addition to its new vegetarian station “Terrarave,” which replaced “Innovation Kitchen.”

Spalding said Waffle Waffle will not replace the waffle station in the cafe. Senior and Waffle Waffle representative Joshua Hudson came to her with the idea.

“The waffles will be available in the following flavors: original, cinnamon, chocolate chip, chocolate cocoa, red velvet and many more,” she said. “If the waffles are popular we will offer them as a special at the kitchen station.”

Spalding said there will be a sampling of these waffles sometime next week in the cafe.

The new vegetarian station was the response to students asking for more vegetarian options in the cafe, according to Spalding.

“We thought it was important to dedicate a station to strictly vegetarian menu items to address this need,” she said. “This menu rotates daily and provide a wholesome vegetarian option.”

“I would absolutely be willing to try [some of the new options],” Bernardara said. I’m actually eating from the vegetarian station right now, so I’m already benefitting from that…and it’s really good.”

Bernardara also noted that the United States is one of the world’s largest egg exporters.

“I know that for a lot of people, the egg shortage is an issue. Eggs are one of the most important trades for the US since we are one of the biggest exporters of eggs.”

Chad Gregory, president and CEO of United Egg Producers, said to ABC News in June 2015 that while the avian flu has been a nightmare for the U.S. egg farming economy, the farmers are still “working to provide customers with a steady supply of safe, affordable eggs.”

Spalding said while the school has been able to handle the egg shortage so far, she hopes the Quinnipiac community will get their menu back to normal by the 2016-2017 school year.

“As soon as we can get them, we’ll serve them. It’s not our choice,” Spalding said.