Field hockey get first win of the season against Yale 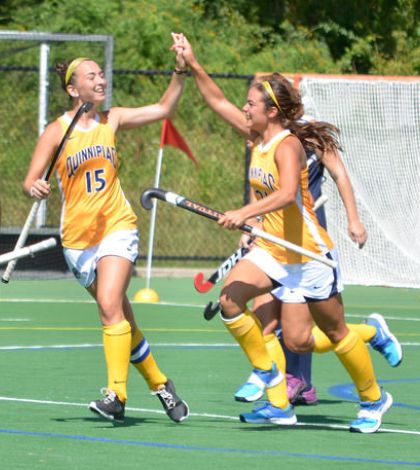 Heading into its first home game of the 2015 season, Quinnipiac field hockey desperately need a win.

The Bobcats had began the season with three-straight losses on the road, and were outscored 13-1 in that span.

But Quinnipiac responded with exactly what it needed: a hard-fought 2-1 win over Yale.

“There are monkeys running around,” Quinnipiac head coach Becca Main said.
“They’re all off my back.”

Senior Savanna Reilly put Quinnipiac on the board nearly 13 minutes into the game to give the Bobcats a 1-0 advantage. Senior Haley Swartz assisted Reilly, who netted her first goal of the season.

Quinnipiac doubled its lead with just over 11:00 left in the first half off the stick of junior Angie King. Senior Meghan McCullough and freshman Michelle Federico were credited with assists, as King scored off the penalty corner for her first goal of the season.

Bobcats’ goalie Megan Conaboy kept Yale scoreless in the first half, as Quinnipiac took a two-goal advantage into the break.

“We really played as a unit,” Conaboy said. “That’s why we were able to push it up the sidelines and score.”

Yale immediately responded at the start of the second half, though. It took the Bulldogs only 52 seconds to make it a one-goal game, after sophomore Carol Middough scored her third goal of the season off an assist from senior Nicole Wells.

In spite of the early goal from Yale, Main and Conaboy credit the team’s upperclassmen for holding Yale at bay.

“It’s really tough to recover after something like that, but the experienced players really stepped up and were able to push everybody to get their feet back under them and get the ball back,” Conaboy said.

“I think they are all vital on the field for us. They know how to watch the clock,” Main said.

With ten minutes left in the game, Yale strung together five consecutive penalty corners. Conaboy and the Bobcats defense did not concede under Yale’s offensive pressure, managing to hold on to the 2-1 lead.

“It’s just trust in the people around you,” Conaboy said. “With our penalty corner unit, I have full faith in them that they’re going to get the job done and do their part.”

Conaboy finished the game with 11 saves.

Quinnipiac plays its next two games on the road before returning to Hamden to play Maine on September 17. Main says she is pleased to finally get the first win under the team’s belt.

“It’s really nice to win at home. It’s nice to get the win. We earned it today,” Main said.