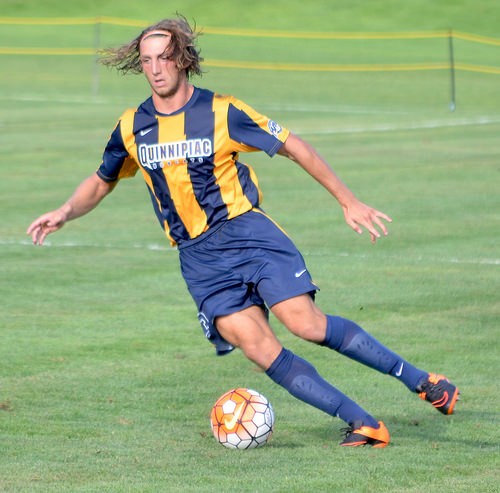 The Brown Bears (1-0-0) spoiled the home opener Friday afternoon for the men’s soccer team, blanking the Bobcats (0-2-1) 2-0 at the QU Soccer Field.

Much like the first two games of the season, Quinnipiac’s matchup with Brown featured more of the same product.

The Bobcats and Bears were knotted 0-0 at the half, but Brown’s Matthew Chow answered, sending one past the outstretched hands of Quinnipiac’s goalkeeper Triston Henry on a three-on-two with 22:55 left in the game.

With the deficit still within reach, Brown’s Tariq Akeel crushed the chances of a Quinnipiac comeback away just 27 seconds after Brown captured the lead.

“It’s guys not being on the same page,” he said. “We should have played the ball back to the [Henry], rather than having [Henry] come out and challenge the ball, then I saw a lot of poor coverage.”

While Henry allowed both goals in the loss, Da Costa described his goalkeeper’s play as ‘fantastic’ thus far.

“[Henry] was great against Boston College, UConn, and today. Neither of those goals were his fault,” he said.

However, Da Costa does not believe his team’s lack of offense, an offense that has yet to score a goal in 270 minutes of play, is affecting his goalkeeper.

“I don’t think it’s difficult at all,” he said. “It’s frustrating for the entire team, when you don’t have offensive production. We’re just not creating enough offensive chances, but that will come. We have a freshman forward and one on the wing. It’s going to take time, but it has no bearing on how Triston is playing or how he is approaching the games.”

Coming into the game, Quinnipiac was 8-22 in shot discrepancy, also ending up on the short end of shots 18-7 in the loss to Brown.

“Everything we’ve been focusing on has been defensive,” said Da Costa. “We play for the MAAC championship. Every game we play now until then is an opportunity to grow and get better. Everything for us is building the backline. With the exception of two goals today, we’ve been very good defensively. The offensive part of that has to come later. It’s the next step in our evolution as a team.”

Quinnipiac is off for one week, until they resume their season at URI on September 12, but Da Costa said the seven day break could not come at a better time.

“I think it’s a great thing,” he said. “Our players need some time off. We’re going to give them some days off to get their legs back and it comes at a perfect time. The break is welcomed. We’ll look at the films and analysis so we can prepare for URI.”