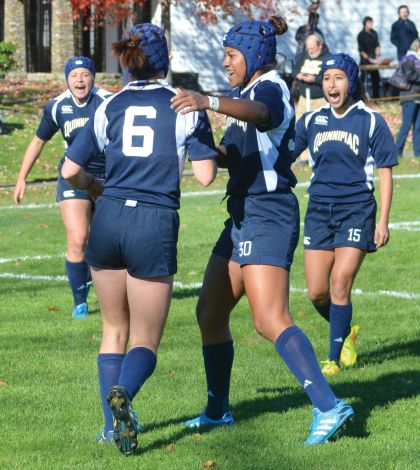 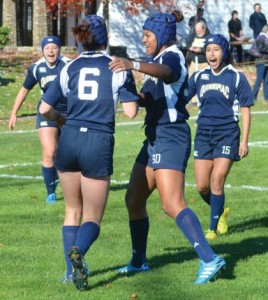 But it wasn’t that win the Bobcats will remember.

This season, they’re trying to make the leap.

“We are kind of right on that cusp,” head coach Becky Carlson said, talking about the possibility of the program playing in its first national championship game. “We have a little bit of a monkey on our back, but we are going to take it one game at a time.”

Carlson has recruited across the country to construct the Bobcats’ 2015 roster. The team has only two players from Connecticut, meaning most of its roster is from all over the United States.

Carlson says the Quinnipiac rugby brand, as well as the growing popularity of the rugby as a sport, has helped in regards to the building of the 2015 roster.

“We are seeing a lot of growth in Washington and California,” Carlson explained. “So it’s a good testament to Quinnipiac’s arm reaching across the United States in the fact that we have such a diverse roster.”

One player that won’t be taking the field this season is Shannon Durkin, who graduated after the 2014 season. She finished her career at Quinnipiac as the program points leader, and even set a single-game Quinnipiac record after scoring seven tries in last year’s 99-19 win against Navy on Nov. 1.

Quinnipiac has a handful of returning seniors to help fill the veteran void, though. Fellow seniors Jennifer Fremd and Raechel Stimson round out the Bobcats’ senior class.

Along with returning leadership, Quinnipiac is excited with what it has seen from its incoming players.

“The new talent is amazing,” Stimson said. “We have some great people coming out and have a strong class coming in.”

Carlson lauded the newest members of the team, as well, saying that most of them are familiar with the sport.

“We have the incoming freshmen who bring depth and experience, already having played in high school and at the national team level,” Carlson said. “They are really pumped.”

Along with an incoming crop of freshmen, Carlson has also brought in two transfers.

Sophomore Jessica Maricich will join Maher and transfer to Quinnipiac from Eastern Illinois University. She led the Panthers with 74 tackles and eight steals-at-tackle in 2014.

The Bobcats are also adopting a new way of thinking. When approaching the 2015 season, Carlson has created a “classless” system for the roster, where the athlete’s academic year doesn’t apply.

Stimson likes the new way of thinking, saying that she thinks the entire team has benefited from it.

“With the classless system, we are all equal and so far it has worked out really well for us,” she said.

Also, Quinnipiac does not pride itself on having specialized players. Rather, Carlson and the coaching staff are looking for players with a diverse skillset. Fremd says the team’s mix of physical attributes allows them to get the best of two styles of play.

“We are a well conditioned team,” Fremd said. “We have a lot of speed because we are smaller than people would expect. We also have a lot of strength after hitting the weight room and did the extra work to get there.”

Quinnipiac’s season begins with four games in September. The Bobcats have started at least 2-0 in each of the past three seasons, and hope to do so againW this year when they play at Notre Dame College of Ohio and at Army to open the season.

Quinnipiac’s home opener is on Sept. 19 against Dartmouth. After that, they’ll travel to Norwich, who beat the Bobcats 45-38 last season.

The team finishes its regular season on Nov. 7 against West Chester before the postseason begins the following weekend.

But if you ask the players, they aren’t looking beyond the first week.

“For me it’s game by game. I don’t even know our schedule to be honest. I’m not looking that far ahead,” Stimson said.

Carlson agrees with Stimson’s game-by-game sentiment, saying that the Bobcats need to focus on doing the best they can each day.

The key to accomplishing that? Keeping things simple.

“When you go back to the fundamentals and the basics, your team will be successful,” Carlson said. “When you are practicing for a Dartmouth or a Brown, you should be practicing no different.”