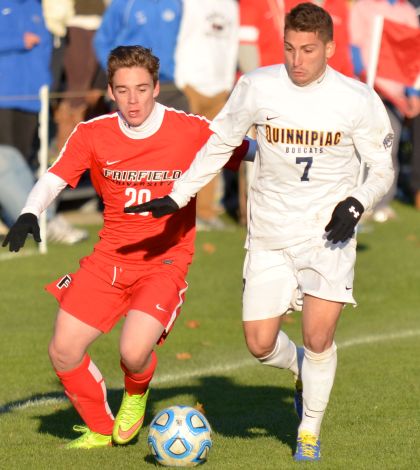 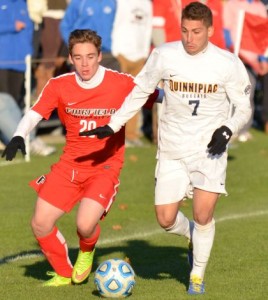 Prior to its third season in the conference, the Quinnipiac men’s soccer team was projected to finish second in the Metro Atlantic Athletic Conference Preseason Coaches’ Poll. The Bobcats are behind the defending conference champion Monmouth for the second-straight year, but did receive a lone first place vote.

Since joining the MAAC in 2013, Quinnipiac is 14-1-5 in conference regular season matchups. In two seasons, the Bobcats have already won a regular season MAAC title and a MAAC Tournament championship to receive a bid in the NCAA tournament.

Last season, Quinnipiac became the third school since 2000 to complete an undefeated regular season in the conference, though they were upset in the conference semifinals against Fairfield.

The Bobcats have shown nothing but success since its inaugural season two years ago, so why aren’t they getting the nod as the best team in the MAAC? Quinnipiac should be the clear favorite for the MAAC this season.

Quinnipiac is led by reigning MAAC Coach of the Year Eric Da Costa, who has created a winning tradition at Quinnipiac on the field and at the recruiting level. And this season, he’ll have two All-MAAC athletes in Tobias Esche and James Doig at his disposal.

Esche has been the anchor of the very successful Quinnipiac defense for four years–a defense that allowed 0.79 goals per game last year. Esche will serve as the captain of the Bobcats’ 2015 squad, and will remain to be the anchor of the defense, alongside returning starters Stevenson Hawkey Erik Panzer and freshman Oscar Evans.

Doig is a third-year midfielder who has been a playmaker since the beginning of his collegiate career. He’s registered 13 points in his time in a Quinnipiac uniform, including his 10-point season last year with two goals and six assists.

The main argument against Quinnipiac’s chances of being the premier team in the MAAC is the loss of reigning MAAC Goalkeeper of the Year Borja Angoita. However, with the strong defense led by Esche, Hawkey and Panzer, the Bobcats will be able to minimize opponents’ scoring opportunities regardless of who is in net.

Plus, junior transfer goalie Triston Henry joins Quinnipiac after playing two season for the University of Connecticut. Henry was a two-time NJCAA champion and All-American while at Herkimer County Community College.

Quinnipiac brought in seven other players, who figure to help the new-look roster, as well. Two freshman, Evans and Rashawn Daily, started in the season opener against Boston College, and both could make a positive impact this season.

Returning players like Shaquille Huggins and Max Rothenbuecher could increase their production, too. Huggins was named to the MAAC All-Rookie team last year while scoring a goal from midfield position. Rothenbuecher recorded four points while playing in 14 games, starting 10 last season.

And lastly, Quinnipiac played well against top-tier teams in its conference. The Bobcats are 2-0-0 against Rider, 1-1-1 against Monmouth and 1-0-1 against Iona.

Quinnipiac should be predicted to be the top team in the MAAC and can be expected to make a run to another conference championship.