Westwoods no longer option for sophomores 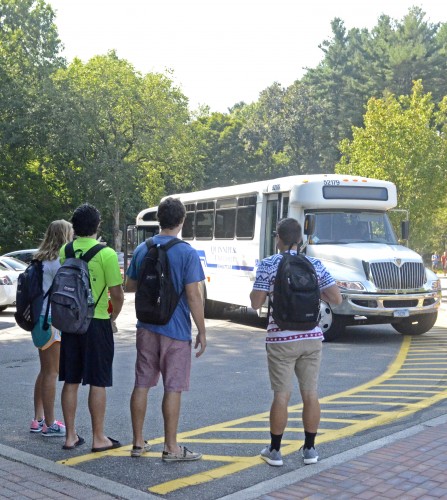 The Department of Public Safety has eliminated Westwoods parking lot as an option for sophomores and replaced it with the fourth floor of the York Hill parking garage, according to Parking and Transportation Coordinator Shanon Grasso. 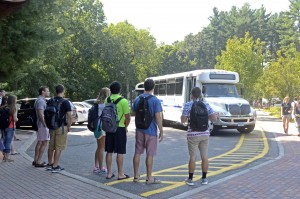 “[Public Safety] started looking at the use of Westwoods a few years ago after complaints from the sophomore class,” Grasso said.

Grasso also said the Student Government Association came to Public Safety last year with complaints from students and asked for a change.

“Students were very vocal on the inconvenience of Westwoods,” Desilets said. “The major complaints were that the shuttles weren’t running on time and it wasn’t close enough [to campus] to walk safely.”

Desilets said he is happy with the sophomores parking in the garage rather than in Westwoods.

“Quinnipiac owns more parking lots than you’d think and they talked about using some of the other random ones around town,” he said. “But I think the garage is the best option because you will get a more reliable shuttle and your [car is] covered for when it snows.”

Grasso said she originally tried to open the Hogan parking lot to sophomores but it was not the right time for it.

“The classes keep growing and there wouldn’t be enough space for students to park,” Grasso said. “We needed to keep the spaces available for commuters as well.”

Grasso chose the fourth floor of the York Hill parking garage so it would not interfere with juniors who usually park on the lower floors.

The elimination of Westwoods allowed Grasso to reroute three additional shuttles to the York Hill campus.

“This made it easier for students so that there will be a shuttle on each campus every five minutes,” Grasso said. “I think students will be happier with the shuttle situation and the parking situation.”

Senior Chelsey Tahan used to park in Westwoods and thinks this change was necessary.

“I don’t think Quinnipiac was really looking out for the students safety by making them park [at Westwoods],” Tahan said. “Then not supplying an adequate shuttle service to compensate.”

Tahan said she used to have a job off campus and wished she had easier access to her car during the school year.

“I would get to the shuttle stop at least 45 minutes early, and I’d still be waiting 20 to 25 minutes later,” she said. “I almost came in late quite a few times due to the shuttle, and yeah, I could’ve walked but [especially] during the winter, it’s dangerous.”

Sophomore Connor McCullough said he would be okay if he had to park at York Hill.

“At least we have somewhere to park as opposed to not being able to park at all,” he said. “There’s much more protection for students as well as a more reliable shuttle to get there.

Grasso hopes this will be a change that creates a positive experience for the student body.

“I was also unhappy with Westwoods and the system really needed to change,” she said. “Some changes are hard to make, but this is a win for everybody.”

Tahan said even though York Hill is further away from campus than Westwoods, it will be more convenient for students.

“[There are] shuttles constantly going [to York Hill] so it wouldn’t be as hard to get up there as it was to rely on the one shuttle to go back and forth from Westwoods,” she said.

Westwoods will still be used for the Polling Institute as well as overflow from university events when there is not enough parking, according to Grasso.

The Westwoods shuttle has been reallocated to the new routes to York Hill.

“Having an extra shuttle stop [at Westwoods] unnecessarily is wasteful,” Grasso said.

Grasso also said there will be accommodations for students who have to get to the Polling Institute for their work study.

Desilets said he thinks students will be happy with this change.

“It’s a longer shuttle ride but you’re safer and it’s much more reliable,” he said. “I can’t see any real complaints from students. We get it, you’re not in Hilltop [parking lot] but number two is not that bad.”