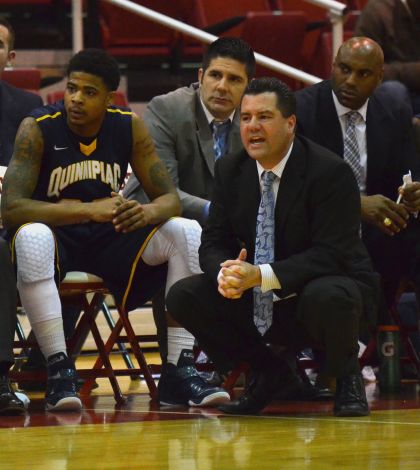 Burrell, the former UConn standout and 1998 NBA Champion, is expected to be introduced as SCSU’s head coach in a press conference on Monday afternoon, according to Malafronte.

Burrell joined Quinnipiac men’s basketball head coach Tom Moore’s staff in July of 2007, where he remained an assistant for the past eight seasons.

“I am thrilled for Scott Burrell as he begins his head coaching career at Southern Connecticut State,” Moore told The Chronicle. “He has done an incredible job for us here at Quinnipiac in all facets of coaching… on the court, recruiting, in the community and as a mentor to our student athletes. We will miss him dearly, but we all share in his excitement in this great opportunity.”

At UConn, the Hamden native became the first player in NCAA history to compile more than 1,500 points, 750 rebounds, 275 assists and 300 steals.

Burrell was drafted 20th overall in the 1993 NBA Draft by the Charlotte Hornets. He enjoyed an eight year NBA career, averaging 6.9 points and 3.9 rebounds per game over that span.

Malfronte first reported that Burrell was the “leading head coach candidate” at SCSU on July 1.

A source inside the SCSU athletic department told The Chronicle on July 2 that Burrell had indeed interviewed for the position, confirming Malafronte’s original report.