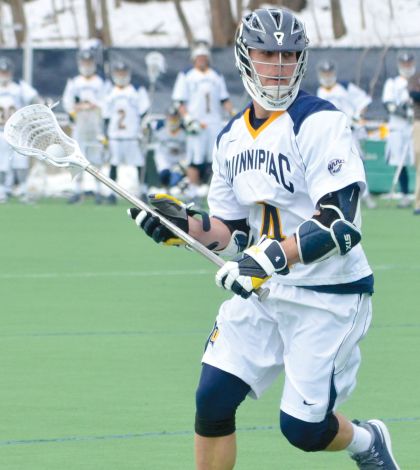 The Quinnipiac men’s lacrosse team has qualified for the 2015 MAAC Championship Tournament, following a season where the Bobcats went 4-2 in MAAC play.
Following their last game of the season, a 12-10 win over Air Force, the Bobcats enter postseason play riding on a four-game winning streak.
Quinnipiac, the tournament’s No. 2 seed, will face No. 3 seeded Detroit Titans on Thursday at Tenney Stadium in Poughkeepsie, New York at 4 p.m. The Bobcats won their regular season matchup against the Titans this season by the final score of 13-12.
Detroit won three-straight games to close the season, finishing with an 8-5 record.The Titans are second in the conference in shooting percentage and man-up success. Their defense is led by goalie Jason Weber, who leads the conference in saves-per-game, averaging 15 per game.
The Bobcats will look to capitalize on the Titans’ penalties. Detroit has the third-most penalties-per-game, and are the second-worst team in the conference in preventing teams to score while up a man. The Bobcats have converted 38% of their man-up chances this season.
Quinnipiac finished second in the MAAC in scoring, averaging 16 points-per-game. The Bobcats featured three of the top five conference scorers in Michael Sagl with 46, Ryan Keenan with 30, and Brian Feldman with 29. Since Feldman earned a starting spot, the trio have shown the ability to dominate games, as shown by their collective seven goals against Air Force in the regular season finale.
Quinnipiac’s defense, meanwhile, has allowed 12 goals-per-game, which is second most in the MAAC. The Bobcats will be tasked with holding Detroit’s offense at bay, which ranks second in the league.
If the Bobcats advance past the Titans, they will face either the Marist Red Foxes or the Monmouth Hawks.
From the start of the season, Marist has been the strongest team in the MAAC, leading the conference in scoring, man-up conversions, and faceoff wins on their way to a regular season MAAC title. The Bobcats lost to the Red Foxes 17-10 in a matchup earlier in the season. In that game Brust split goaltending duties with Colin Nesdale.
Quinnipiac has had success against Monmouth this season, as they defeated the Hawks 9-8 With the Hawks offense being the second worst in the conference, they played to a 3-3 record in conference this year, and earned themselves a four-seed.
The Bobcats play in their first round game against Detroit this Thursday at Marist College.