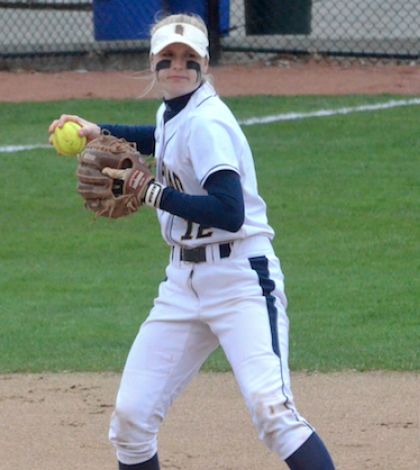 That issue rectified itself on Sunday.

The offense tallied a total of ten runs between the two games, providing more than enough support for pitchers Hannah Lindsley and Casey Herzog.

“We just jumped on the pitchers better today,” she said. “Iona threw faster, so timing could have been a bit of an issue. Today the speed jumped down a little bit, so the adjustments were easier. But, our approach was the same.”

Heading into the seventh, allowing five runs on nine hits and three walks, Lindsley toed the rubber aiming to finish her day with the complete game victory.

She could not finish the job, but Karwoski was pleased with her performance.

“[Lindsley] was consistent against a good-hitting scrappy team,” she said. “By that fourth time around the lineup, good teams will adjust. We were hoping [Lindsley] would give us five or six innings and she did that.”

After Rider’s Gina McCool poked a single to left to open the seventh, Karwoski called onto Herzog.

She delivered, retiring the next three batters to notch her second save on the campaign, improving Lindsley’s record to 7-12.

Although Herzog was slated to start game two, Karwoski counted on her to be available for an appearance in the first game.

“It wasn’t last resort,” she said. “She was the first reliever we were going to use in game one. The situation called for it. Our game plan for the seventh inning was to bring Casey in, if the first runner got on to mix up speed. It was their fourth time around the lineup. We tried to throw them off guard a little bit.”

Not only was Rider thrown off-guard for the seventh, but Herzog had them fooled through the entirety of game two, shutting the Broncs out, allowing four hits, one walk, and striking out five, improving her record to 3-7.

“I think I was good,” she said. “I was able to locate and throw strikes consistently and my defense helped me out behind me.”

Runs were harder to come by for the Bobcats in the second game, as both teams were deadlocked 0-0 heading into the fourth.

With two-outs and Keilani Finley on third, shortstop Maria Ascher blooped a 1-2 fastball into shallow left field to give the Bobcats the lead.

The score remained 1-0 into the bottom-of-the-sixth, then Herzog provided herself with some insurance, punching a single to left, driving in two runs.

Herzog had no trouble in the seventh, retiring the Broncs on three pitches to finish off the sweep.

Up next for Quinnipiac is a trip up to Storrs, as the Bobcats will take on UConn on Wednesday at 4.