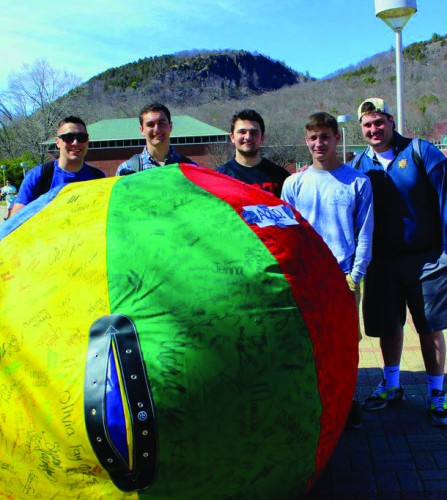 Quinnipiac’s Zeta Beta Tau (ZBT) fraternity hosted its annual “Get on the Ball” event on April 15 and 16. The fraternity raised money for the Children’s Miracle Network hospitals, according to ZBT Philanthropy Committee co-chair Marc Shlissel.

ZBT’s University of Maryland (College Park) created the event. During the event, people sign their names on an inflatable ball that is six feet in diameter. Businesses then donate $.01 to to $.10 per signature.
While other ZBT chapters have given an option to pay a set fee for the charity, Quinnipiac’s chapter did not make the businesses do that.

“We didn’t have a set amount that we told businesses to pledge, we let them pledge what they felt comfortable pledging,” said Shlissel.

Among those who donated to Quinnipiac’s event are Droogie’s, Ray and Mike’s Dairy & Deli and Primo’s Pizza. The Alpha Chi Omega sorority and some members of the student body also donated.
While Shlissel believes that the businesses were keeping in the goal of getting money to as many people as possible, vice president of the fraternity Grant Arnold believes the businesses were more cutthroat than the sorority and student body.

“Businesses, in my opinion, are more competitive because a lot of their businesses [sic] come from Quinnipiac students,” Arnold said.

Getting the ball set up is a challenge in and of itself. There are two components to the ball: an inner shell, which was borrowed from Penn State University’s ZBT chapter, and an outer shell to write the signatures on. They plan on getting their own inner shell, but finding out how much money was made on the outer shell is also a meticulous task, according to Arnold.

“Each business pledges a certain amount for each pledged signature… Then at the end we count them and let each business know what they owe. They are also welcome to donate any extra amounts as well that don’t deal with their original pledge per signature,” Arnold said.

Although Greek Weekend was the week before, this event is not associated with Greek Weekend. ZBT is not interested in competing with other fraternities or sororities, and just wants to have as much money go to philanthropy as possible, according to Arnold.

“This is not a competition between chapters, we truly want to get as many signatures as possible in order to raise as much money as we can for Children’s Miracle Network Hospitals,” Arnold said.

However, that does not mean that Greek Life did not help with their efforts. After Quinnipiac Greek Life’s lip sync event, Arnold said that it brought ZBT closer to the other fraternities and sororities. In particular, the entire Phi Sigma Sigma chapter at Quinnipiac signed the ball.

The event was also going to be held Monday, April 20, but inclement weather prevented them from holding the event for a third day. In the end, Arnold felt that two days were enough. The outer shell’s signatures are being tallied starting April 21, and the inner shell will be sent to the University of Alabama’s ZBT chapter.