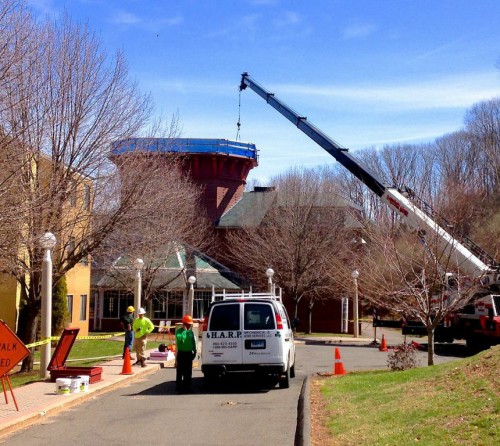 Verizon users on campus may soon have an easier time with their phone calls.

A Verizon macrocell is being constructed on top of Ledges in response to staff and student complaints about coverage, according to the Director of IT Project Management, Jim Trella.

A macrocell, according to the Ofcom website, provides the main signal coverage over a network. Macrocells can be placed on top of an existing structure, like a building.

Students were notified of the project via email. The construction began on Thursday, April 16, with cranes in the Complex Circle lifting materials and equipment onto the Ledges rooftop. Some students, like freshman and Verizon customer Michael Cestare, approve of the new macrocell.

“There was a point [in time] where a lot of people were struggling to have service,” he said.

In respect to the construction, some students didn’t mind the presence of cranes and other machines.

“It wasn’t even that bad. They just took over the blacktop area. It wasn’t in my way so I didn’t mind it,” Ledges resident Harold Wiseman said.

Others, like freshman Andrea Baldick, found the construction on April 16 annoying.

“It started at 9 a.m. and I was still sleeping, and it woke me up. It’s inconvenient but it’ll be nice when it’s done,” she said.

Freshman Kirsten Hohman would not mind if the macrocell gives her better service, but questioned if it is the best use of funds.

“The money could go to the bricks that are all messed up,” she said.

Trella thinks that despite the costs, the end results are worth it.

“It’s not cheap, but it serves in our best interest,” he said.

The macrocell is expected to be finished for next semester. There is already a macrocell for AT&T service on top of Ledges.