Students took to the Quad last Friday to celebrate Earth Day a week early with vendors and a paper dress fashion show that promoted environmental consciousness.

But Quinnipiac is not as focused on sustainability as it could be, according to a report conducted last year with the university’s support by a company called Resonate. Resonate found the university is behind when it comes to having a sustainable campus, as compared to 10 other peer institutions.

This did not come as a surprise to professor Kristen Richardson, a member of the Sustainability Committee, which is one of the groups that worked with Resonate as it conducted its report.

“We know we haven’t committed a lot of resources to sustainability, so we know we’re not going to come anywhere near [the other universities],” she said. “But we wanted to gauge where we were so that we have baseline from which to measure ourselves in future years.”

But, second-year graduate student Chris Caldari said the university does a pretty good job when it comes to sustainability.

“I see a lot of recycling bins and we have a big Earth Day celebration every year and a lot of people are pretty adamant about it,” he said. 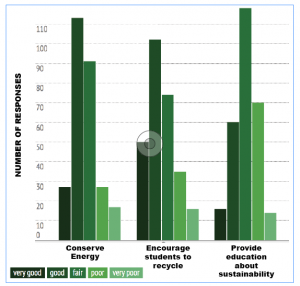 In order to become more committed to sustainability, the report said the university needs to make several changes, such as creating a sustainability plan, having one person who focuses on these efforts and incorporating these lessons into the curriculum.

“Some courses we have, some courses we may need to create,” Reap said. “But I think with the increased flexibility people can now potentially put together something that would allow a concentration in sustainable science or sustainable studies or some creature like that.”

The university is considering hiring one individual who is in charge of sustainability on campus, but Associate Vice President of Operations and Sustainability Committee member Terri Johnson said this may not happen soon.

Yet Richardson said it is difficult for the Sustainability Committee, which is made up of students, faculty and staff volunteers, to have the time to raise awareness and run events.

“It’s really hard to get volunteers to be willing to sacrifice any more of their time,” she said. “To do something [like] that right now, even though it’s a priority for us and for many other people on campus, it’s not for the university as a whole. And so we do what we can.”

The committee supports programs like the Farmers Market, Earth Day celebration, the community garden and the “Bobcat Bulb Swap.” The Sustainability Committee does not have its own budget, but runs most of its initiatives through the Facilities department’s budget.

It also has made smaller changes around campus like adding hydration stations.

“We don’t really have goals that we try to set out to impose on the university,” Johnson said. “But it’s a passion of ours and we’re working to infuse that into our culture here.”