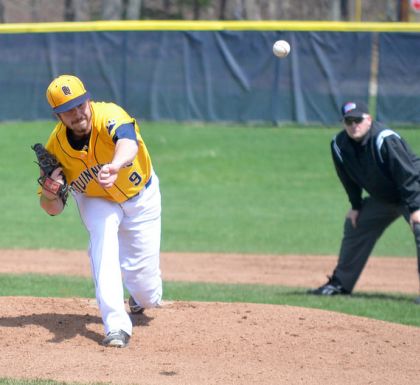 Following Saturday’s double header, where Quinnipiac won the first game in 10 innings and lost the second 8-4, the Bobcats played host to the Fairfield Stags.

Quinnipiac looked to end the three-game series on a high note, and they did just that. In a pitcher’s duel between Quinnipiac’s Justin Thomas and Fairfield’s Kevin Dube, the Bobcats pulled away in a 2-1 victory.

The Stags were the first to strike, as a Mac Crispino single drove in Sebastian Salvo in the top of the first inning, Thomas would settle down, and only allow that one run in his 5.2 innings pitched, while getting the no decision.

“This was a battle of great starting pitching from both teams,” Quinnipiac head coach John Delaney explained. “This was especially a great start from [Thomas] and it really helped to set the tone for the rest of the game.”

Meanwhile Dube did his part to keep the Stags in the lead. He was only able to keep the Bobcats off the board until the fourth, when a Matthew Oestreicher single drove in Matthew Batten. Dube ended his start striking out three and giving up four hits in his 5.2 innings of work.

With the game tied up in the sixth inning, both team’s managers went to their bullpens with two outs in the inning. The Bobcats had two runners on base, Fairfield’s Joe Randall was able to pull the Stags away from the inning scratch free.

The Bobcats eventually took the lead in the eighth inning. After the team loaded the bases, freshman Ben Gibson hit a sac fly to left field to make the score 2-1.

Freshman Robbie Hitt got the win out of the bullpen for the Bobcats. Hitt pitched 2.1 innings in relief, before handing the ball over to sophomore closer Greg Egan.

After inheriting a runner on first from Hitt, Egan allowed the next batter to first base, and following a wild pitch, and a strikeout, Fairfield was left with runners on second and third base. Egan struck out the last batter of the game, and clinched the Bobcats their victory.

“[Hitt] pitched better than we have seen him out of the bullpen all season, he did great today,” Delaney described. “As for Egan, he is a bulldog, he is the one kid who thrives in a situation like that, and with the game on the line we’d rather have the ball in nobody else’s hands.”

The Bobcats now look forward as they are slated to face Albany on Tuesday in Hamden.