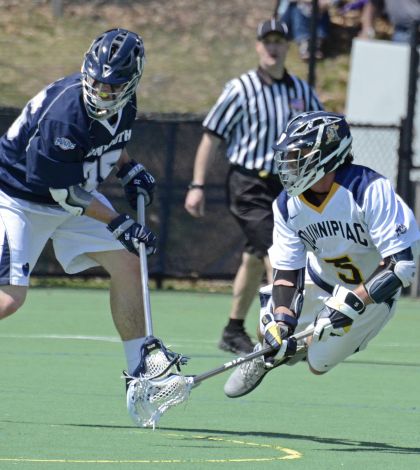 Following a 9-7 victory at Canisius in its last game, the Quinnipiac men’s lacrosse team (4-7, 3-2 MAAC) looked set to clinch a trip to the MAAC Tournament on Saturday. First, they had to go through Monmouth (5-6, 2-2 MAAC).

Quinnipiac was successful, coming from behind to down the Hawks 9-8 in its final home game of the regular season.

After a ceremony honoring the senior class prior to the game, Monmouth came out looking to spoil the Bobcat’s special day during the first half. Despite goals from freshman Brian Feldman, senior Steve Bryant and junior Ryan Keenan, Quinnipiac found itself staring at a 7-3 deficit at the half.

Following the game, Quinnipiac head coach Eric Feteke spoke of how the scoreline wasn’t accurate of how his team had played in the first half.

“Two or three of the goals we gave up in the first half were flukes, coming off of deflections or other weird bounces, and we told them to keep following our game plan and eventually we will get our own bounces,” Feteke said. “They have done a really good job following the game plan the last three weeks, and I knew that they would be able to come through in the second half.”

Senior goalie Jack Brust then shutout the Hawks in the third and the Bobcats’ offense found new life. Led by goals from Matt Kycia and Nate Nibbelink, the team entered the fourth down two scores.

Thanks to quick goals from Matt Diehl and senior Michael Sagl, Quinnipiac pulled even for the first time in the game with 10 minutes left to play.

Sagl and Feldman then each scored their second goal of the game to put Quinnipiac up 9-7. A late goal wasn’t enough for Monmouth, as Quinnipiac secured the win and is headed to the playoffs.

“We’ve learned a lot, especially this year’s seniors,” Fekete said. “The key thing we learned is to play our best lacrosse in the last 30 minutes of the game, and that is what we did today.”

Now following their win the Bobcats clinched their spot in the MAAC tournament, something that the team missed out on last season.

“I have been miserable since this time last year, over 365 days I have had a monkey riding on my back,” Feteke explained, “I’m so glad to be back, and with the league as wide open as it is, we are right back where we belong.”

Quinnipiac will fly out to Colorado on Tuesday and prep for its final regular season game against Air Force in Falcon Stadium on Thursday.