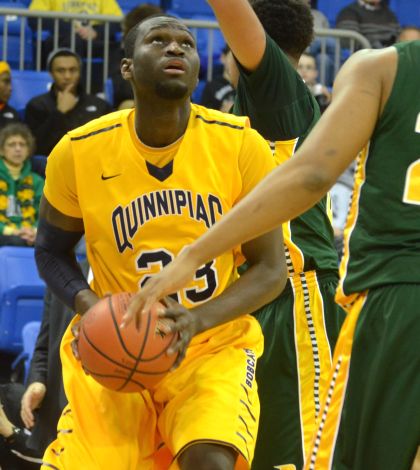 After participating in the Portsmouth Invitational Tournament last weekend, Quinnipiac senior Ousmane Drame says he feels optimistic about his future in basketball.

Drame says he didn’t come in direct contact with any National Basketball Association (NBA) scouts in attendance, but that there seems to be a “high level” of intrigue coming from organizations leading up to the NBA Draft on June 25.

“All of the people I talked to at the tournament said I did really well—they said I stood out,” Drame told The Chronicle. “There seems to be a good level of interest.”

Drame was one of 64 college basketball seniors invited to the 12-game, four-day tournament from April 8-11 in Portsmouth, Va. He finished with eight points and eight rebounds in his first game, then scored 11 points, grabbed 12 rebounds, recorded three steals and blocked two shots in his second game.

“A lot of people that I spoke to think that I did really well, but I personally felt like I could have played a lot better,” Drame said. “I did what I was capable of doing, but I just felt like there was a lot of shooting going on out there.”

Drame added that he’s currently in the process of finding an agent and that he’ll likely have one by next week. Once he’s chosen representation, he’ll look ahead to any possible workouts teams invite him to.

“I don’t know for sure, but if I had to guess I’d say five teams might want to have me for a workout,” Drame said. “I don’t know if it will be more than that, but I’ll workout for whoever I can.”

Drame said he’s doing strength and conditioning each day to prepare himself for the next level, and that he’s working out three days a week on the court to stay sharp.

Ultimately, his goal is to play basketball at its highest level: the NBA.

“I have high standards for myself, I think it’s an attainable goal,” Drame said. “I’ve gotten some exposure now and things like that, allowing me to showcase my skills. There’s been a high level of interest, so I just have to keep a strong work ethic.”