More than 1,400 students entered the Rec Center on April 11 to attend the opening ceremony of the university’s sixth annual Big Event.

Started 28 years ago at Texas A&M University, the Big Event is the largest nationwide, one-day, student-run service project in the United States, according to the Student Government Association (SGA) website. It is organized by SGA and the Community Action Project (CAP) with the purpose to provide college students with an opportunity to “give back” to residents of the surrounding community.

After the ceremony, students were sent to 106 sites in and around Hamden from approximately 10 a.m. to 2 p.m. Students cleaned up elementary school playgrounds, picked up trash at Sleeping Giant, decorated gifts for hospitalized children, played Bingo with residents of a senior center, and volunteered at other camps, parks and organizations.

At the 9 a.m. opening ceremony, President John Lahey thanked students for participating in the Big Event and challenged the college student stereotype of being “self-centered, selfish and not willing to do community service.”

“You know what I’d say to those people [who believe the stereotype]? Come to the Big Event,” he said. “I can’t tell you how important it is…when you go out to the communities of Hamden and North Haven, you’re representing Quinnipiac in such a positive way, and as your president I just want to tell you how enormously proud I am.”

Sophomore Allison Sicbaldi volunteered with a group of friends at the Southington YMCA. She said that while her volunteer coordinators could have been more friendly, she enjoyed this year’s Big Event and would “absolutely” return next year.

“The Big Event gets you more involved in the Hamden community and even the Connecticut community as a whole, it helps you feel like you’re doing something,” Sicbaldi said. “We have this great opportunity to go to this great school and I just want to give back to the community for that.”

Junior Gianna Costantino, one of the Big Event’s co-directors, said that she received lots of positive feedback from both students and volunteer site coordinators. 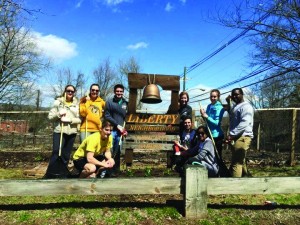 Costantino has been working with senior and fellow co-director Shannon Winslow to organize the Big Event since September. They worked with a 15-member e-board and several committees to contact volunteer sites, recruit students to volunteer, plan meetings, oversee finances and publicity, and ultimately ensure that the event goes smoothly.

“There’s a lot that goes into planning the Big Event that people don’t know; it’s like a part-time job that we do for free,” said Costantino. “But it was all worth it. Pretty much everyone who registered came and the energy in the gym was really exciting. It was a good morale booster.”

Winslow said she looks forward to next year’s Big Event, which SGA and CAP already started planning on April 13, and thinks the event is important for students to participate in because they spend a large amount of their year living in Hamden.

“It just shows [Hamden residents] a better picture of Quinnipiac students than some of the negative stories they hear,” she said. “We want to show the community that we’re not just a stereotypical college…we get up early on a Saturday morning and we like to give back to the community that we live in, because it is a home for us.”