Students to strut in sustainable dresses 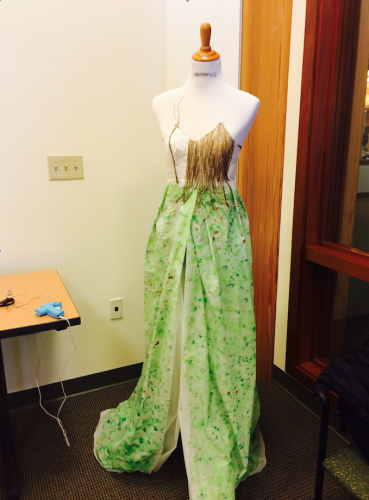 Recycled wear can be fashionable. Or at least that’s what Hanna Hejmowski of the Central European Institute wants to show at this Friday’s Sustainable Fashion Show.

At this event, also known as the Paper Dress Fashion show, students will walk the runway in attire made of recycled material. The show, the second of its kind, is set to start on April 17 at 4 p.m. on the Quad as part of Quinnipiac’s annual Earth Day celebration.

Unlike last year, the students who made the dresses were part of Hejmowski’s one credit class, intro to eco fashion-creativity for wellness or PE 191. Hejmowski is intrigued by how a small project of hers from last year has turned into a class, which is now offered every spring semester.

“It is fantastic to see the Quinnipiac community get involved,” she said. “This class is a creative outlet and the students do need it.”

The students are not bringing out their creativity just for a good grade. According to Hejmowski, this is also the first time that this show is working with a charity. The class is raising money for a Hungarian camp named Bátor Tábor. The camp was founded by Paul Newman and is a member of the SeriousFun Children’s network, an international association of therapeutic recreation camps.

“Not only is this show establishing a creative community, but also an international community because of the camp,” Hejmowski said.

To reflect the charitable aspect of the show, the designers are required to incorporate a butterfly made by the children from the camp into their dresses. Bátor Tábor’s goal is to have sick children come in and healthy children return home. The kids change, in a manner similar to that of butterflies.

“We are raising money for sick people in order to help them. It is a great feeling,” senior and designer Lydia Morales said.

According to Hejmowski, thinking outside the box is key while participating in this class.

Morales said she is happy that she signed up to be a part of this class.

“I am an Interactive Digital Design (IDD) major so anything that has art involved draws my attention and is fun,” she said.

This class has attracted non-art majors, as well, such as senior Carleen DelGreco, a physical therapy major.

“[The class] is a nice break from all the science courses,” she said. “I also had room for a free elective and this class seemed like unique and interesting concept.”

Her favorite part of the fashion show are the butterflies.

“They make the cause feel more real,” she said.

This class does require lots of work. The designers are required to make one dress and one accessory. A lot of the designers work on their creations outside of the classroom as well, but they said they don’t mind.

“This event is important and the time spent is fun,” Morales said.

The fashion show is just one of the programs at Quinnipiac’s Earth Day celebration, set to be held from 1-5 p.m. on Friday. Vendors and other organizations such as the Hiking Club, Nutrition Club and Students for Environmental Action (SEA) will also be present, according to Hannah Kissinger, junior and co-chair of the Earth Day Committee.

“Earth Day should make one feel like they are making a difference in the world,” Hejmowski said. “We can all do something. It does not have to only be on Earth Day.”