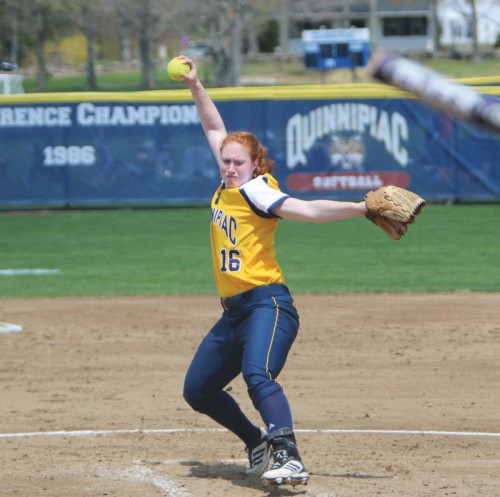 On Aug. 26, 2013, Quinnipiac hired Jill Karwoski as the softball team’s interim head coach. Six months later, Karwoski was promoted to head coach, and was tasked with trying to turn the program around.

Through her first-year evaluations, Karwoski found a hidden gem already on the Bobcats’ roster. Hannah Lindsley, one of Quinnipiac’s starting pitchers, wasn’t only a pitcher. She could hit at a high level, as well.

“Over the past year and a half, I have gotten to know Hannah [Lindsley] personally, as well as athletically, and where she fits into making that impact on our team,” Karwoski said. “It has been an evolving process.”

Lindsley only started one game and had eight plate appearances during her entire freshman season in 2011-12. Despite the miniscule numbers, she says she learned from the team’s upperclassmen her rookie year.

Her sophomore season was a different story. By the end of her second year, she tallied career highs in appearances (27), starts (22), wins (7), complete games (9), and innings (121.1). Lindsley says she made the most of her opportunity to earn her spot as a regular starter on the Bobcats’ pitching staff in her sophomore year.

“I finally got my chance to pitch,” Lindsley said. “I proved myself, and I earned my spot.”

Yet, Lindsley finished her sophomore season with even fewer at-bats than her freshman year. She says then-coach Germaine Fairchild decided to keep his pitchers away from the batter’s box.

“It was the old coach’s philosophy that pitchers shouldn’t really hit,” Lindsley explained.

Karwoski says she was open-minded in creating the team’s lineup and rotation when she first became head coach of the program.

“My goal was not to come in here and already have a set lineup in my head,” Karwoski said. “It was to see what we were working with and utilize their strengths to our benefit.”

Lindsley started 18 games on the mound, compiled 116 at-bats, and hit for a .241 batting average in her junior year. She became the first Bobcats pitcher to throw a no-hitter since the team became a Division I program in a 2-0 victory over Manhattan, and even blasted two home runs in one game.

After making the switch from a pitcher to an all-around player, one might expect Lindsley to slip in either of the categories. However, both she and Karwoski believe that the combination of pitching and batting complement her skill set.

“When she is hitting well, I am sure her confidence is that much stronger on the mound,” Karwowski said. “When she is pitching well, she also has that confidence at the plate where she knows, offensively, she can put up a few runs to help herself on the mound.”

Lindsley began playing softball in Little League when she was 6 years old. She went on to play varsity softball, basketball, volleyball and soccer at Narragansett High School in Rhode Island. She was named to the Rhode Island All-Star team in basketball and won the state championship in soccer during her senior year.

Although her parents encouraged her to play an assortment of sports, Lindsley stuck with the sport she had the most passion for: softball.

“My parents pushed me to play sports and to try a variety,” Lindsley said. “I really liked softball the most.”

Lindsley says that picking a school during recruitment was an easy choice. Quinnipiac was her top choice from the time she came to campus.

“I really liked the school, the programs they offered, and the size,” Lindsley said.

The senior has already put up her best single-season batting statistics with half of the season to go. Lindsley is hitting a career-high .300 batting average and has also set personal bests in RBI’s and runs scored. The Metro Atlantic Athletic Conference also named her conference player of the week after batting .467, hitting three home runs and knocking in eight RBI’s.

The three home runs came in consecutive at-bats in a 13-7 loss to Saint Francis at Charlotte’s First Pitch Classic. Lindsley now has five home runs on the season after hitting two all of last year.

“[Her power] has been a pleasant surprise, that’s for sure,” Karwoski said.

Lindsley is one of four seniors on this year’s team. However, as one of the team’s top sluggers and aces, she says she is different from her fellow leaders on and off the diamond.

“I am more of a leader by example,” Lindsley said. “I am not very loud like our other seniors are, but I try to lead by example and try to do the right things on and off the field.”

Lindsley’s impact on the team has gone beyond the field and into her teammate’s refrigerators. Lindsley is a nutrition major and is on the e-board of QU Eats, the university’s nutrition club. She says she has helped her teammates get into a regular eating regimen.

“I encourage my teammates to eat healthier, eat before we lift, and eat between practices,” Lindsley said.

She is looking to complete her bachelor’s in nutrition before moving onto graduate school to pursue her master’s degree. Before then, Lindsley says she is on a mission to finish her softball career at Quinnipiac strongly.

“I think I am really trying to leave it all on the field my senior year. I am going for the wins and a successful season, so I am really putting it all out there,” Lindsley said.