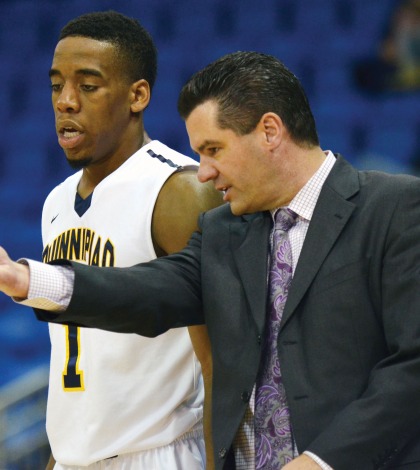 For Quinnipiac men’s basketball head coach Tom Moore, the news that sophomore guard Kasim Chandler would transfer out at the end of the 2014-15 academic school year didn’t come as a surprise.

Moore said he has meetings at the end of the year with each one of his players, and that the idea of Chandler leaving the program was something that came up in the conversation between the two.

“Most of his decision was based on playing time in the future,” Moore said. “I think he enjoyed his time here, but I don’t think he necessarily felt, from a basketball point of view, that it would be the best situation for him to stay.”

Moore added that there is a possibility of others transferring, but said that it’s a process most college programs go through every year.

“I think in general, if somebody else does leave us, it will be a very few amount. The number will be very small,” he said.

Moving forward, that leaves Quinnipiac with three guards on its current roster who can handle the ball next season: Giovanni McLean, Ayyron Hutton and Dmitri Floras.

“I’d be comfortable with the three guys we have in the program now as primary ball handlers,” Moore said.

The presence of transfer guard Giovanni McLean will help Quinnipiac fill a major hole next season, according to Moore. After transferring into Quinnipiac, McLean missed the entire 2014-15 season after an investigation regarding transcript fraud at his prior school, Westchester Community College.

“You need talented good guards in this league, and guys who can just make plays with the ball and shoot the ball,” Moore said. “[Losing McLean] really blew a hole in our perimeter depth in a part of our team that, going into the season, might not have been a strength anyways.”

The school still has two scholarship positions open, and one of the spots could be filled with another guard who can handle some point guard duties, Moore said.

In the Bobcats first two season in the Metro Atlantic Athletic Conference (MAAC), they’ve finished third overall (2013-14) and sixth overall (2014-15) in the conference standings. Moore said that he was “very proud” of how this year’s senior class brought Quinnipiac into the new conference, but acknowledged that Quinnipiac still has areas to improve in.

“We certainly feel like we need to improve our shooting, that was our Achilles heel all season,” he said. “And our passing, our decision-making and our overall IQ on the perimeter has to improve, so we’re looking for guys to do that.”

Quinnipiac shot just 38.9 percent from the floor this season, which ranked last in the MAAC. It also shot only 32.0 percent from 3-point range, which was eighth in conference play.

“Last year we had Umar Shannon and Shaq Shannon [in the backcourt], we were just better and older,” Moore said. “That translated into 14 league wins. This year we only had nine league wins, and a lot of that had to do with our guard play.”

Next season, Quinnipiac will have some key vacancies to fill following the loss of graduating seniors Zaid Hearst, Ousmane Drame, Evan Conti and Justin Harris—who all averaged more than 25 minutes per game on the floor in 2014-15.

Aaron and Andrew Robinson headline Quinnipiac’s recruiting class. The twins from Springbrook High School in Maryland are both 6-foot-5, and figure to compete for regular minutes as freshman in the upcoming year.

“Both can shoot the ball from the long range,” Moore said. “Aaron has some two [guard] in his game, but Andrew is more of a three [guard].”

And for Quinnipiac’s eighth-year head coach, next year brings a new challenge of determining who will play major minutes.

“We have to just continue to build our depth,” Moore said. “It’s going to be a fun year next year, there’s going to be a lot of new faces. It will be more wide open in terms of playing time probably more than any year I’ve been here, to be honest.”