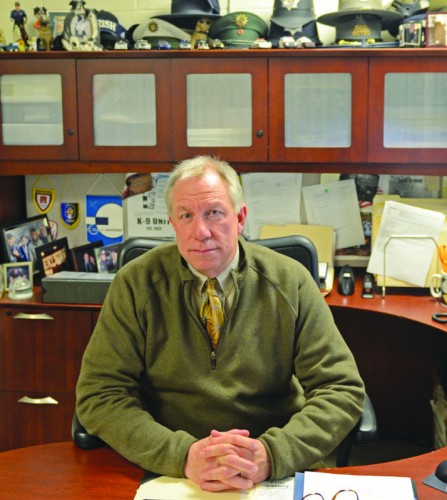 40 years worth of policing awards, medals, helmets and badges cover his office and desk, a desk he’s been sitting at for five years.

Barger explained that his passion for law enforcement began when he was young.

“I come from a long line of blue. Within my family especially, it was not strange that I wanted to go into law enforcement,” he said.

After Barger graduated from the State University of New York in New Paltz, he immediately entered the Meriden’s policing academy and was a member of the 87th training troop of the Connecticut State Police.

Barger always wanted to be in law enforcement due to the unpredictable nature of the job.

“I wanted to walk into my office every day and find something new,” he said. “I found law enforcement very appealing because of that.”

But now after 15 years at Quinnipiac, he has decided to retire on June 30.

“I told my wife I wanted to spend 40 years in law enforcement,” he said. “I promised her I would spend the next 40 years with her after I completed those years of service.”

As of right now, Barger is unsure who the next chief will be, but he knows that the department will be in good hands.

Barger decided to enter campus policing because he liked the idea of the challenges he would face on the job. His role as a member of the SUNY New Paltz campus police helped solidify his decision to become assistant chief of security at Quinnipiac in 2000.

“You don’t get any more community policing than university policing,” he said. “With my own personality and my own makeup, I decided I really wanted to go back to campus policing.”

Barger mostly worked evening shifts and found this was the best time to learn about the dynamics of the university.

“It taught me a lot about the culture of the university,” he said. “I really wanted to learn and I wanted to fit in and see how public safety fits in on this campus.”

In 2010 Barger was promoted to the Chief of Public Safety after the previous chief, John Twining, moved over to the emergency management department.

Barger said at the time, taking the position was the right thing to do for the department. His reasoning for his promotion is related to the quote he sends at the end of all of his emails from management expert Peter Drucker.

“[Drucker] always said, ‘Rank does not confer privilege or power, it imposes responsibility,’” Barger explained. “I strongly believe in that. I was given a rank to take on a greater responsibility in helping the department move forward in a positive manner and make it the best possible Public Safety department we could make and we are still well on our way.”

Barger said working as the Chief of Public Safety is one of the most rewarding jobs he has ever had.

“I can’t say it is fun because it doesn’t do it justice,” he said. “But it is really fulfilling to move along with it and try to develop the safest campus that you can for the students, your faculty and your visitors.”

One of Barger’s greatest accomplishments during his time in law enforcement was when he was a member of the Connecticut State Police and was in charge of the K9 Unit.

“I was very fortunate to have this job,” he recalled. “I had helped in creating the first official dog training classes in the state of Connecticut and it was very rewarding.”

Barger trained dogs in Europe as well as in the state of Connecticut, but he said his favorite part of the job was to see the dogs learn in short periods of time.

“You took a dog that only knew how to do two things, eat and then go to the bathroom,” he explained. “You actually train that dog within 10 to 12 to 14 weeks to find people, drugs, explosives and a myriad of other things. It was a lot of long days and a lot of training but it was very fulfilling at the end to see how far the dogs had come.”

One personal accomplishment Barger takes pride in is having a successful marriage for 38 years and counting.

“It’s a law enforcement thing,” Barger said. “Most people are married to the job and sometimes that doesn’t work out. But I was fortunate enough to sustain a marriage with my wife and have two daughters, all of whom I love very much.”

Barger said what he will miss most about the job is being able to interact with students. He takes pride in what he calls his “open door policy” where any student can come and talk to him whenever they want or need to.

“If [the students] weren’t here, I wouldn’t be here,” Barger said. “If there were no students, what would I be doing here? I owe my livelihood to [them]. I see it as counterproductive and almost idiotic to say that I am not going to interact with [the students] during my time here.”

Barger also said he will miss the people he works with on a regular basis.

“There is a camaraderie that you don’t have with a number of other jobs because often you are together during the good, the bad and the ugly,” he said.

Barger’s secretary Patricia Polvani said the entire department is going to miss him.

One of Polvani’s best memories with Barger is that he always makes her laugh.

“He makes me laugh every day no matter how awful my day might be coming in,” she said. “He always makes me laugh and smile… And that is one of the memories I will always have of Dave [Barger].”

Barger believes after retirement he will not steer too far from law enforcement, but he knows his role will greatly diminish. He does know he wants to spend more time training dogs.

“That is where my passion lies,” he said while smiling. “My passion has always been in law enforcement, but dog training is like the equivalent to a student’s minor while in college.”

He also plans to get his feet on the ground and take a breather before moving onto the next chapter of his life, though he is unsure what that next chapter will be.

“I will be 60 years old in June and this is the first time in my life that I can’t tell you what I am going to be doing on July 1,” he said. “But you know what? I am really looking forward to what is ahead.”