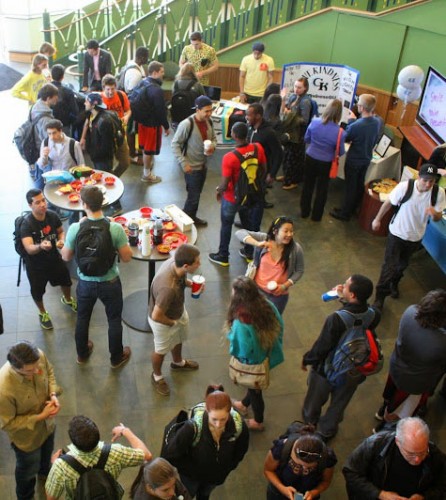 As their startups fill the Piazza, entrepreneurship students will show the Quinnipiac community what they’re made of on April 10.

The Entrepreneurship Club will host the 2nd annual QStart next Friday at 11 a.m. The event was created last year in order to showcase student-run startup companies, according to the event’s Facebook page.

“Some of these students have family-run businesses they are taking over and are working for,” Ugalde said. “Some kids have fresh ideas that they want to display this idea to the community.”

Some of the student-run businesses that will have tables at QStart include clothing lines such as Cronk Studios and Yalla Kix, as well as the scholarship organization Have a Heart.

Sophomore Jordan Rosenberg, creator of Yalla Kix and vice president of promotions for the Entrepreneurship Club, is just one of the student entrepreneurs who will be at QStart.

“I am probably going to display a bunch of custom made Timberland boots that we have done and showcase them at the event,” Rosenberg said. “I have been working on a t-shirt design just for QStart so we will see what that looks like.”

Not only will students display their own startups, but students will also have the opportunity to present their own business ideas in SC225 during the event, according to Ugalde.

“Students that are participating in the event are going to have the opportunity to pitch their ideas and have their ideas heard,” Ugalde said.

Though students of all majors will be allowed to pitch their business ideas, junior Julia Salvia, founder of Beauty by Julia, said she hopes to see more students from outside majors get involved in QStart.

“Making this a yearly event and something that the whole school could enjoy would be amazing,” Salvia said.

This year, the new local business Zara Café will be handing out food at QStart. Ugalde said he’s excited to have the new restaurant participate in this year’s event.

“I really like the idea of newer and local businesses that are in the Hamden community can participate,” he said.

The event, which is open to the public, was very successful last year, Ugalde said.

“We had around 1,000 students coming in and out throughout the event so it was a really huge event,” he said. “It was exciting because people were impressed with the businesses and the turnout in general.”

“He walked in through the door and I was shocked to see him there,” Ugalde said. “What was great was Lahey’s eyes; his eyes were big because we had a ton of people here at this event and it was amazing.”

Due to his busy schedule, Ugale said Thompson will most likely not speak at this year’s event.

Although various changes have been made from last year’s QStart event, Salvia said she is most excited to have students come see her business.

“It’s rare when I get to do special effects and fashion type makeup,” she said. “Last year it was such a great turn out having models actually walk around with my work done on them. It’s something different from any other business and something physical that students can see.”