A night of laughs 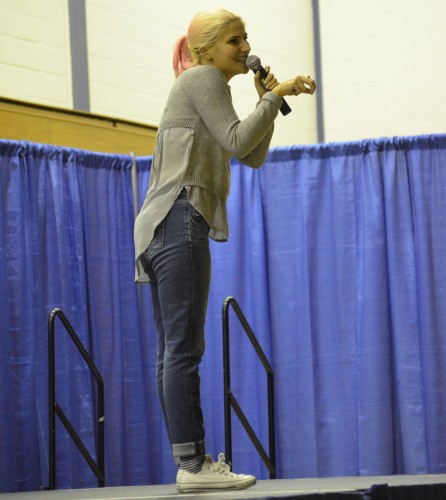 “Girl Code” is a female-driven comedy series that offers over-the-top tips on being a woman and opens a dialogue on the trials and triumphs of womanhood.

Burt Kahn Court was filled with energetic college students. SPB provided snacks which ran out before the start of the show.

More than 750 students attended the show, SPB Arts and Entertainment Chair Kelly Ledwith said in an email. Once Aquilino took the stage laughter filled the air.

Aquilino’s set focused on issues that college students face today. She spoke about topics such as traveling, drinking and being drunk, friends and feeling ugly.

Aquilino made the set flow like a conversation between just two people.

“I’ve never been inside a gym before,” Aquilino said to the audience. “So this is cool.”

She always knew she wanted to do something in comedy. During the question and answer portion of the show, she said she didn’t attend college and when an opportunity to perform stand-up presented itself, she jumped on it.

She opened the show with a story about her recent trip to Miami and why she didn’t like the city.

“If you haven’t been there I’m going to explain something to you,” Aquilino said. “No matter what you look like, when you get there, you just get off your plane and you’re like ‘I’m so ugly.’”

Heads in the crowd nodded in agreement. Young women turn and make quick comments to the people they are with and then quickly direct their attention to the stage.

Aquilino says what many women are often thinking.

“This is not Instagram right now, how is this person real?” Aquilino said as she described a woman she saw in the airport. “There’s no Photoshop or filter, I didn’t even know that existed.”

Even though Aquilino has performed in some of the most popular clubs in New York City, she’s still a regular girl in her mid-20s.

In her biography on MTV.com, Aquilino’s father described her as “a huge mistake.” And even if it is supposed to be take with a grain of salt, she has quickly made a name for herself in the New York comedy scene.

Aquilino is described as someone anyone can connect with, according to Buzzfeed Community Member, Anna Kopsky. Kopsky created a list of the “21 Times Carly Aquilino From MTV’s ‘Girl Code’ Was the Most Relatable Person Ever.”

At 24, she’s been through a lot of things college-aged women are experiencing now.

Her favorite girl code: always bring flat shoes out on a Friday and Saturday night.

“Because it’s embarrassing to walk home at 10 a.m. in high heels,” Aquilino said. “Who does that?”

She admitted that there is an unspoken texting code of conduct when it came to talking to the opposite sex, like how women never send a text first.

“Do you ever try to figure out how many y’s to put on the end of ‘hey’ before you look desperate?” Aquilino asked facetiously.

She engaged the audience and had them thinking of times they felt the exact same way.

She casually talked about one time when she was in the supermarket with her boyfriend and he was trying very hard to not get caught checking out another woman. Little did he know, Aquilino was checking out the same exact woman because she was so beautiful.

Aquilino attempted to describe the outfit the woman was wearing: a green ensemble.

“I’m assuming it was work out clothes? I’m not familiar,” Aquilino said.

There was never a period of awkward silence during the performance. Aquilino was very blunt and never tip-toed around topics of sex and booty calls.

She told the audience about a booty call she received at 3 a.m. When she called the man out on his purpose for the phone call he smoothly told her he had a lot of leftovers that needed to be eaten.

“If I ever have kids with him am I going to tell my kids they’re here because of pizza?” Aquilino asked.

Food is always on Aquilino’s mind.

She described her ideal man as a slice of pizza with Doritos on it.

A man Aquilino was seeing wanted to roleplay and asked her to pretend to be a sexy nurse, but she thought of something more practical.

“Can you pretend I work at Chipotle?” Aquilino said. “I can be like the bean girl or something.”

She once created a Tinder profile of pizza. She matched with a ton of woman who sent her dirty messages and their cell phone numbers.

Aquilino closed her hour-long set with a question and answer session.

SPB thought the event was successful and the students who came had a very positive response, Ledwith said in an email. SPB hopes to have more events like the stand-up comedy show in the future, according to Ledwith.