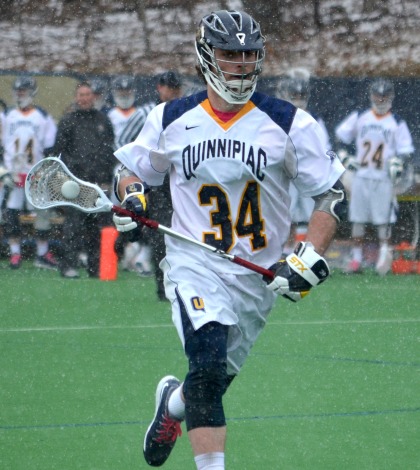 After players departed for the showers, students sulked back to their dormitories and the grounds crew collected the equipment, Quinnipiac men’s lacrosse head coach Eric Fekete sat on the bench with his eyes closed and head in his hands.

Quinnipiac men’s lacrosse’s effort to give Metro Atlantic Athletic Conference rival Marist its first conference loss of the season came up short, as the Red Foxes (6-3, 3-0 in MAAC) bested the Bobcats (2-6, 1-2 in MAAC) 17-10 on a snowy Saturday at the QU Turf Field in Hamden.

Saturday, though, Nesdale’s day was cut short after allowing six goals on seven shots in just over one quarter of play. Fekete replaced Nesdale with Jack Brust.

“I didn’t think Colin was seeing the ball well today,” Fekete said. “Sometimes that happens. But because we won last week, I thought Colin deserved to start. I was comfortable switching to Brust. Jack played great.”

Following an unassisted wrist-shot goal in the back of the net by Michael Sagl, who extended his point streak to 40 games, the Red Foxes took control and never looked back. Marist tallied nine goals in the second quarter, including an 8-0 run to end the first half to give them a 14-5 lead over Quinnipiac.

“I thought we didn’t hold the ball well in the second quarter,” he said. That’s when it got away from us. That’s a team that relies on offense. If you don’t balance out possession times, or starve yourself for the ball, you’ll fall behind.”

“We struggled with faceoffs all game,” Fekete said. “We played better on the faceoff last week. That element of our game was a little in the tank and their guy did a very good job today.”

In the second half, the Bobcats outscored Marist 5-3. Quinnipiac’s Ryan Keenan notched four goals and finished with five points for the second consecutive game.

Coach Fekete said his team executed his game plan in the first quarter and entire second half.

“We had a tendency to get away from the game plan in the second quarter,” he said. “Our team runs well on good long possessions. We’re not a transition team. We like to play six-on-six game. When we did that last weekend we were successful. We did that 3 quarters today and were successful. But if you don’t play the full 60 minutes in this league, you’re going to lose, and that’s what happened today.”

Marist capitalized on the man up possession three times on five Quinnipiac penalties and forced 11 turnovers.

Despite the loss, Coach Fekete said his team will recover if it limits its mishaps.

“I don’t think it’s a matter of us not being good enough to win,” he said. “I give Marist a lot of credit. But, I don’t think we were outplayed. I think we’ve given today’s game away by making a lot of crucial mistakes.”

Quinnipiac wraps up the month of March with a visit to Stony Brook (6-2, 1-1 in MAAC) on Tuesday.