You make me wanna shout 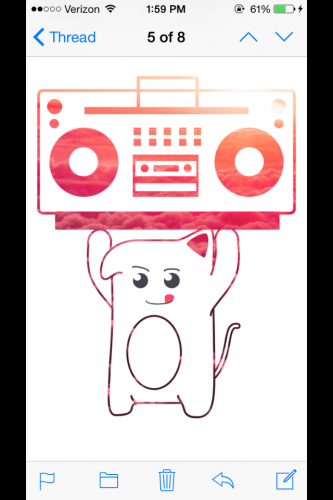 It took a random day at work for her to come up with a T-shirt design that she finally liked. Afterward, senior marketing major Kelly Murphy sent over her idea to the graphic designers that helped bring the creation to life.

The words “you make me wanna shout” were written in all caps on the back of the shirt in teal and the word “shout” stands out in magenta. The front of the shirt is a drawing of a cat—Shout’s logo—holding up a boom box with a mischievous look on its face.

She was finally content with the company’s new design.

Murphy is an ambassador for Shout—an app that allows you to share photos and thoughts within a local community. Users can choose a specific location setting, meaning they can choose how far they want their “shouts” to go from 25 feet up to 50 miles. This feature is similar to Yik Yak, which only allows users to interact with people within a 10-mile radius. The ability to post photos on Shout gives the app an Instagram vibe. In fact, Shout describes itself as “Instagram meets Yik Yak.”

Murphy has worked on shirt designs as part of her job with the company, which are then handed out to help promote the app.

Shout is less like a competition to have the most likes but rather a place where everyone in your radius is included and welcomed to post what they want, according to Murphy. Users can shout to a specific city, apartment building or even a college campus.

“It’s beneficial to students because you don’t have to follow [other people],” she said. “It’s also helpful ‘cause it can work with campus groups when trying to share about certain events going on at QU.”

The creators of Shout are currently working on a video feature, which would also allow students to share short clips of different events, Murphy says.

But apart from having various campus groups using the app to promote their events, it also has an appeal for students who just want to share random posts about anything going on in their lives.

“It’s great because people are like, ‘oh, I want to post this somewhere, but I don’t want it to just disappear like with [the app] Fade,’” Murphy said.

Shout is constantly monitored by the CEO and community manager for specific violations like photos or posts that are considered inappropriate. So anything containing nudity or drug-related shouts are quickly taken down. The feed is always monitored and, in addition, users have the ability to flag any inappropriate content they come across, she says.

“So far we have been having very positive content so it has not been an issue,” Murphy said.

Other similar apps like Yik Yak are known for having completely uncensored posts and it’s even been banned from some college campuses for alleged bullying incidents via the app. Shout, however, isn’t like this especially since users are not anonymous like the users on Yik Yak.

“[Shout] can just fit in with the rest of your social media,” Murphy said. “[Students] are using Yik Yak but that can be negative ‘cause it’s anonymous.”

This semester, Shout plans on co-sponsoring events and it has reached out to the CEO of A Shot for Life to donate and help raise money for the cancer research charity, according to Murphy. The app will also hold photo contests and a prank war for April Fools’ Day coming up on April 1.

“[Shout has] been distributing the download cards on campus and have looked into flyers, but most of [the] advertising will be word of mouth.”