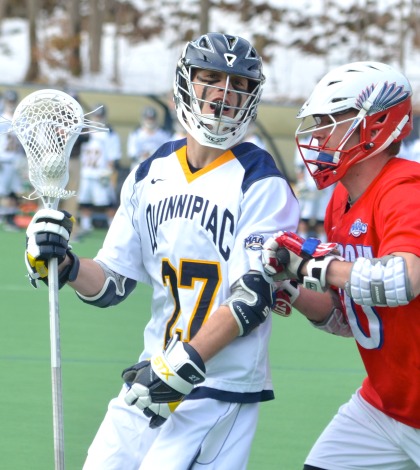 The Quinnipiac men’s lacrosse team got a much-needed conference victory on Saturday at the QU Lacrosse Turf Complex in Hamden. The Bobcats hung on to beat Detroit Mercy 13-12.

The thrilling win makes Quinnipiac 2-5 on the season, and 1-1 in the Metro Atlantic Athletic Conference action. Detroit remains winless in its first two conference games.

“We have been focusing on the fundamentals and the basics and we played really hard off the ball as of late, which has helped to stimulate our offense,” Quinnipiac head coach Eric Fekete said.

Senior captain Michael Sagl set the tone for the Bobcats’ offense. Sagl tallied five points on one goal and four assists, good for his 10th career five-point game. Sagl has registered a point in 39-straight games.

“We had really good offensive possessions and treated each one individually,” Sagl said. “We did not let [Detroit] dictate our offense and were able to execute for four quarters.”

“Michael [Sagl] has been a workhorse for four years here, he is the heart of the operation,” Fekete said.

Junior Ryan Keenan netted a team-high four goals to go along with one assist on the afternoon.

Quinnipiac displayed its offensive capabilities in the first half, scoring a season-high eight goals to take an 8-7 advantage into the break.

The Bobcats pushed their lead to three by the end of the third quarter, when Feldman and Matt Kycia put in back-to-back goals to make it 12-9.

Detroit Mercy netted consecutive goals to pull within one with six minutes left in the game, but Quinnipiac’s defense took over from their.

Leading 12-11, the Bobcats defense forced multiple key turnovers and Quinnipiac goalie Colin Nesdale made some timely saves by to keep Detroit from tying the game.

The Bobcats had five penalties in the first half, then played the final to quarters without a single penalty.

For Fekete, the fact that Quinnipiac didn’t have to play a man down in the second half was huge.

“We talked all week about trying to stay out of the box,” Fekete said. “There’s two kinds of penalties, the sloppy kind and the ones that come during the course of play. The guys did a good job cutting out the sloppy ones.”

Quinnipiac looks to build a winning streak in its next game against Marist on Saturday at the QU Lacrosse Turf Complex in Hamden.