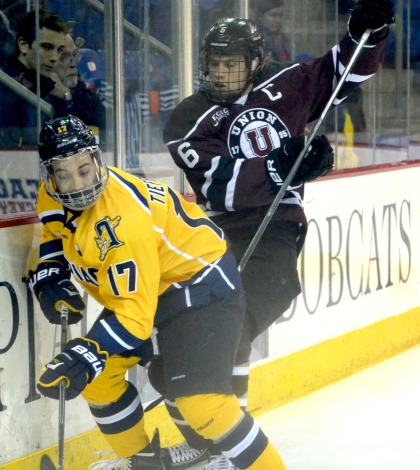 Sam Anas scored two goals with under 90 seconds remaining in the third period, Alex Barron netted the game-winner in triple overtime, and Quinnipiac men’s ice hockey completed a comeback over Union on Friday night at the TD Bank Sports Center in Hamden.

With the win, the Bobcats take a 1-0 series lead over the Dutchmen in the ECAC Hockey Tournament Quarterfinals

“It was a pretty good hockey game, it was crazy,” Quinnipiac head coach Rand Pecknold said after the game. “I’m really proud of our guys, we didn’t have any quit. We feel fortunate to get the win.”

The Dutchmen struck first when Matt Wilkins scored a power-play goal after Travis St. Dennis was sent to the penalty box for tripping. Wilkins sent one past Quinnipiac goalie Michael Garteig, giving Union a 1-0 lead with 10:18 remaining in the first period.

“They were better than us early,” Pecknold said.

Then, with 4:56 left in the second period, the Bobcats cut Union’s lead in half when Tim Clifton deflected Justin Agosta’s shot into the back of the net on a power play.

The Bobcats would have another opportunity to score in the second period, after forward Devon Toews was tripped up on a breakaway attempt and was rewarded a penalty shot. Toews missed wide left with the shot, however, keeping things at 2-1 Union.

Michael Pontarelli pushed the Union lead to two goals after he flipped the puck past Garteig on a 2-on-1 chance with 15:02 remaining in the third period, making it 3-1 Dutchmen.

With 2:17 remaining, Pecknold opted to pull Garteig and skate with an extra man on the ice.

The plan couldn’t have worked better, as Quinnipiac forward Sam Anas shot the puck past the Union goalie Colin Stevens to pull the Bobcats within one.

“It was an awesome pass from Agosta, I wasn’t even expecting it,” Anas said. “I just saw the open net and I slid it in.”

Union was called for too many men on the ice after the ensuing faceoff, giving the Bobcats another power-play opportunity.

Pecknold chose to pull Garteig again to skate with a 6-on-4 advantage.

With 37 seconds remaining in the third period, Anas rose to the occasion again and scored again to tie the game at three apiece and send things into overtime.

“It was chaos with the 6-on-4 situation,” Anas described. “I received a great pass from Devon [Toews] and I was able to put it in the back of the net.”

Pecknold was proud of the way Anas performed toward the end of regulation.

“He is a goal scorer,” Pecknold said. “He was great tonight and we are fortunate to have him.”

Quinnipiac and Union battled back and forth in the first two overtime periods, but neither could score, despite having many opportunities to do so.

The Bobcats were able to win the game in the third overtime after senior forward Alex Barron scored the game-winning goal on a redirect.

“I was so tired, I didn’t even know what happened,” Barron recalled. “I was just screaming ‘shoot the puck’ and Dan [Federico] ripped it and I got lucky and it tipped off my stick.”

With the win, Quinnipiac holds a 1-0 series lead over Union.

“This is one of the better wins here in my 21 years at Quinnipiac,” Pecknold said/

The Bobcats are back in action tomorrow, as they host Union for Game 2 of the series. Puck drop is set for 7 p.m.