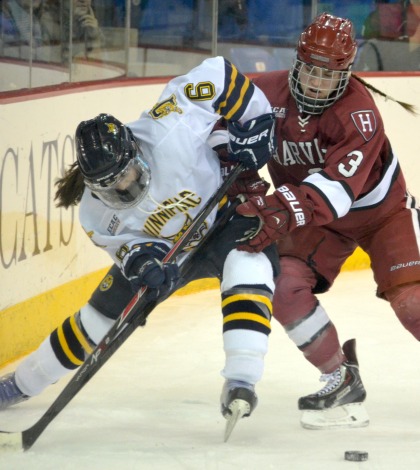 The Quinnipiac women’s ice hockey team will square off against the Harvard Crimson in the first round of the NCAA Tournament on Saturday in Boston. The game marks the Bobcats’ first national tournament appearance in program history.

Harvard defeated Quinnipiac last Saturday in the ECAC Hockey Tournament Semifinals, eliminating the Bobcats from the conference tournament. Miye D’Oench scored the winning goal for Harvard nearly three minutes into overtime to down Quinnipiac, 2-1, the Crimson to the league championship game. Harvard went on to defeat Cornell, winning the ECAC Tournament.

Quinnipiac finished third in ECAC Hockey with a 26-8-3 overall record, going 15-5-2 against conference foes.The Bobcats went 0-2 against Harvard during the regular season, falling by the final score of 2-1 on both Dec. 6 and Jan. 20 (overtime).

Harvard outscored Quinnipiac 123-97 on the season in four fewer games played. Quinnipiac surrendered only 40 goals in 37 games played, however, which is 11 fewer than Harvard allowed.

In the battle of the goaltenders, Quinnipiac’s Chelsea Laden holds the league record for shutouts in a season, setting it during the first round of the ECAC Tournament, and currently has 16 for the year. Laden is third in the country in goals-against average and has a .933 save percentage.

On the other end, Harvard’s Emerance Maschmeyer is eighth in the country in GAA but holds a .941 save percentage.

Quinnipiac also earned the fewest penalty minutes of any ECAC team this season.

Taylar Cianfarano leads with Bobcats with 17 goals, while Nicole Kosta tops all players in assists with 15.