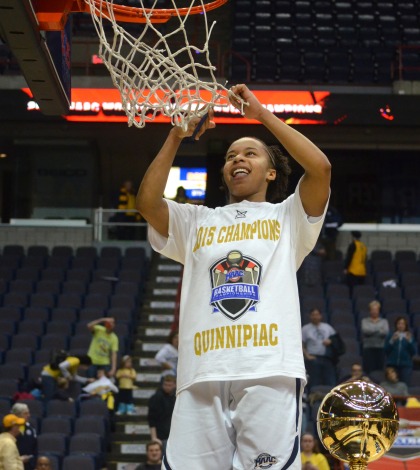 And after coming up just short last year in the Metro Atlantic Athletic Conference Championship’s final game – when the Bobcats lost to Marist – Fabbri’s motivation only got higher.

Quinnipiac entered Monday’s rematch with the Red Foxes needing only one more win to avenge the four-point loss and get another chance at winning a the program’s first March Madness game.

“We had to play one of our best games to win today,” Fabbri said. “With that being said, I could not be more happy for these young ladies. It’s just a great day for us.”

Jasmine Martin led the charge with 18 points and four rebounds on 7-of-15 shooting for the Bobcats.

“We knew we weren’t losing today,” Martin said. “We had a chip on our shoulder from a year ago, and we had that refuse-to-lose attitude.”

After the game, Martin was awarded the tournament’s Most Valuable Player award. She scored 57 points over Quinnipiac’s three games in the postseason.

“Jasmine Martin was outstanding,” Marist head coach Brian Giorgis said. “Maybe we had the wrong game plan, but my goal was to stop Samantha Guastella, and we did.

Marist held Guastella to just six points on 2-of-9 from the field. Guastella netted six 3-pointers in Quinnipiac’s Semifinals win against Siena on Sunday, and was selected to the MAAC Tournament’s First Team after Monday’s win.

For the senior, winning was far more important than any stat line.

“Losing to Marist last year is a feeling I’ll never forget,” Guastella said. “This year, we were prepared and ready. I knew we could beat them.”
Quinnipiac led by as many as eight points in the first half, but Marist cut the Bobcats edge to only three points at halftime.

The Red Foxes then cut another Quinnipiac lead to just three points with 11:23 left in the second half, as Sydney Coffeey sunk a free throw to put Marist in striking distance.

That was as close they would get. Brianah Ramos, in for Quinnipiac’s starting point guard Gillian Abshire due to foul trouble, drove to the basket and made a layup while getting fouled. She sunk the foul shot, and the lead went back to six points, 50-44.

”[That play] was immense,” Fabbri said. That’s just a real small piece of why we’re so tough to beat. Everyone has confidence, everyone wants to go in and contribute. And you saw that today in the biggest stage for us.”

Ramos had nine points on 3-of-3 shooting from the floor, and sunk all three free throws off the bench.

“She was fantastic,” Fabbri said of Ramos.

Senior Nikoline Ostergaard added 15 points, six rebounds and three assists in the win. Ostergaard went 7-for-8 from the line in the win.

Quinnipiac now moves to 31-3 on the year, and 23-0 in MAAC play. The first round of the NCAA Tournament will take place on March 20 and 21, and the Bobcats currently await their opponent – which will be announced in next Monday’s NCAA Tournament Selection Show.

“We’re more experienced [than we were two years ago],” Ostergaard said. “I think we have a better chance to get that first [NCAA Tournament] win.”