Last year’s bomb threat by a former student took commencement for a chaotic turn. President John Lahey called it “the worst day of my life.” With a concern for students’ safety and the hope to make commencement more personal, the new spot for graduation is no longer on the Quad in front of the Arnold Bernhard Library on the Mount Carmel campus.

In an email addressed to the class of 2016 from Lynn Bushnell, vice president for public affairs and chair of the QU Commencement Committee, the junior class was informed their graduation ceremonies in May 2016 will all take place at the TD Bank Sports Center on the York Hill campus.

Graduation ceremonies are always held on the Quad. Because of last year’s bomb threat issue, the graduation ceremony for the College of Arts and Sciences was held in the TD Bank Sports Center. And, according to Bushnell’s email, that is going to be the new tradition.

“We made these changes so that each school could have a much more personalized, student-centered ceremony,” Bushnell wrote in the email. “This also enables graduates and their families to enjoy this special day in a dry and secure location where optimal viewing is ensured.”

The ceremonies will take place on May 21, 2016, and May 22, 2016, according to Bushnell’s email. She said there will be more finalized details later this semester and an email update will be sent to students.

At the State of the QUnion on March 5, Lahey said the change in location was an attempt to accommodate the students and their families and friends.

The email was sent at 1:49 p.m. and some students immediately took to social media to voice their disagreement with the change. 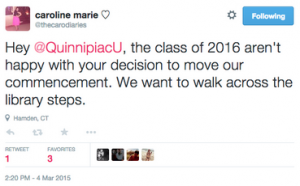 “I was especially upset about the change because our class was the last to have our convocation ceremony on the Quad during our Welcome Weekend freshman year,” Moses said. “Since then I always pictured our class in the same spot, ending our time at Quinnipiac just as we started it.”

The reason Moses said she doesn’t want graduation to be in the TD Bank Sports Center is because she said she thinks the location lacks memories for students.

“It’s just not fair for us to move to a place that only holds memories of basketball games and school events, rather than a location that reflects the years we’ve invested in our academics here,” Moses said.

However, Moses said she hopes if enough students express their dislike for the move, the university will hear their opinions and possibly change the ceremonies accordingly.

“I don’t think that they’ll be eager or willing to revert to the older commencement plans,” Moses said. “But I think that at the end of the day, it’s our graduation ceremony, and maybe our conversations will encourage them to remember that when making their decisions.”

Another student, junior nursing major Marissa Faretta, said her excitement for graduation has almost vanished knowing that she won’t be graduating on the Quad.

“It’s sad that we have such a beautiful campus and that’s what we love about QU and now we have to graduate in a confined space in the sports center,” Faretta said. “It just doesn’t seem as exciting now.”

Despite the student upset, Bushnell said in her email the changes are intended to provide what is best for the students.

“All of us on the Commencement Committee have the best interest of our graduates, their families and friends at heart as we make these important changes,” Bushnell’s email said.