Lahey on Hamden: ‘It’s a positive and ongoing relationship’ 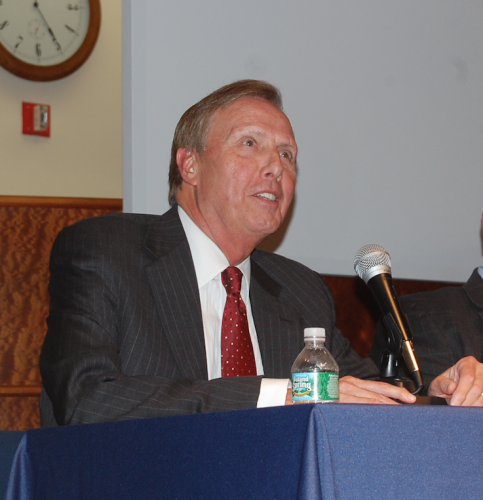 The university’s relationship with the town of Hamden is positive and “mutually supportive,” President John Lahey said Wednesday at the 2015 State of the QUnion.

Lahey said some Hamden residents, who are frustrated with students who live off campus, point to the 22 students who were charged in the fall of 2013 for off-campus parties. Lahey said those 22 students only represent a small percentage of the student population and that they lived in non-Quinnipiac owned housing.

Though there has been backlash from the Hamden community about the increase in students in off-campus houses, Lahey said students shouldn’t worry about wanting to live off campus.

“[Off-campus houses] are privately owned and our students have every right to live in them,” Lahey said.

Lahey said despite the minor issues, Quinnipiac and Hamden have a “mutually supportive” relationship. He said the residents of Hamden tend to have problems when Quinnipiac students leave garbage on their lawns, park cars on the grass and/or play loud music. 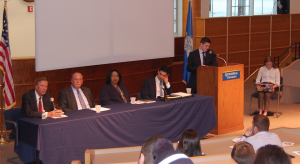 “The totality of our relationship with the town of Hamden, [these issues are] a tiny, tiny part, and the rest of it is overwhelmingly positive,” Lahey said. “I’m enormously proud of the work of our students. You represent our universities in this town – on the campus and off the campus.”

Lahey said there will be new residence halls and 250 beds added to the York Hill campus for students who wish to remain on campus for all four years of their undergraduate studies. He said the design for the new buildings will be similar to Eastview, with private bedrooms and air conditioned suites. The only difference will be in size, as the university will opt for several smaller residence halls instead of one large building.

Yet, the expansions on York Hill raised the question about whether or not Greek life or sports teams will get their own housing in the near future.

“I’ve been happy with the growth in the Greek organizations,” Executive Vice President and Provost Mark Thompson said. “It’s been difficult to provide you with the appropriate space to be able to do what you want to do.”

Both Thompson and Lahey said there are no current plans to create housing specifically for sports teams or Greek life. But Thompson said the university is planning on possibly providing space for various organizations to hold events and meetings.

This lack of space for organizations could be directly related to the increase in the number of students attending the university. Lahey said there has been growth in certain departments and declines in others.

“Last year we did not renew the contracts for 11 professors,” Lahey said. “But we added 12 new, full-time faculty in other areas. This year was the first time we really addressed some really significant declines in the School of Communications and the College of Arts and Sciences.”

“My hope is that we’ve taken care of all the changes,” he said. “But nothing is guaranteed in life and certainly I can tell you this, if the enrollments are maintained, the same number of students we have no desire [to layoff professors.] We think we have adequate staffing for the students we have and the quality that we want. And we would only make reductions in select cases.”

It was a “tough” decision to cut faculty, Lahey said.

“And obviously it’s even tougher on those who were now removed,” he said. “But sometimes decisions have to be made. But I certainly don’t do it with any enthusiasm and it would be the last thing that we would do.”

Lahey said the average class size at the university has increased over the past few years from 20 students to 22 students. He said 22 students is still a relatively low number when comparing Quinnipiac on a national basis. Thompson added there are still larger classes that can have upwards of 30 or 40 students. 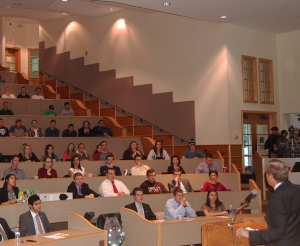 But beginning in May 2016, commencement ceremonies will only take place at the TD Bank Sports Center instead of the Quad, and each will be individual.

“I would say we’ve been struggling with commencement for a number of years,” Lahey said. “That’s one of the challenges when you grow as we have… Over the course of the past 20 years, we’ve been moving increasingly to have some of those commencements indoors.”

Lahey said the main reason for permanently moving the location of the commencement ceremonies is to make the experience more personalized and focused on the students. He said the move to indoors will also prevent issues regarding weather, as well as maximizing the number of family members students can invite.

Lahey said he plans to work on a campaign that will get the endowment to “at least $1 billion, if not more” by the university’s 100th anniversary.

Check out The Chronicle’s Storify from the event here.