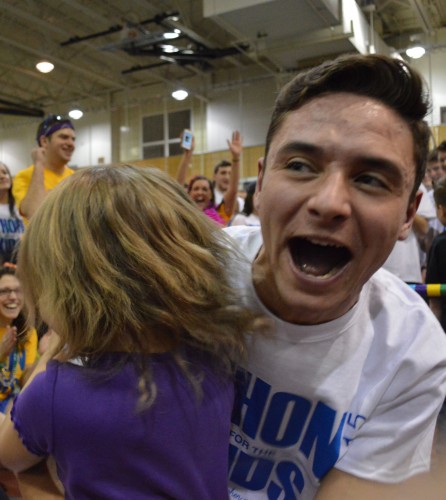 This year at the third annual QTHON, more than 900 Quinnipiac students raised $55,018.35 to provide medical treatment for children in financial need.

QTHON is a six-hour dance marathon that raises money “For the Kids” and for the Connecticut Children’s Miracle Center (CCMC) in Hartford. It is part of a nationwide student-run movement involving more than 150 schools who support Children’s Miracle Network hospitals.

This year’s event took place on Feb. 28 in the Recreation Center. Fifty-one teams were scheduled to attend, according to the event’s registration website.

It was “life-changing,” according to junior and two-time QTHON participant Katie Lowe.

“Last year I attended QTHON not knowing what to expect, and it was an amazing experience for me,” Lowe said. “[It’s] such an amazing resource for families who have children that need medical attention.”

Both the attendance and fundraising were nearly doubled this year, since last year’s QTHON raised $31,000 and had 583 attendees.

Over the course of the six hours, 11 “miracle families” from CCMC spoke to students about how the event changed their children’s lives.

“Thank you so much for your support,” one emotional mother said. “We really couldn’t have done this without you guys.”

Junior Brittany Coda, a member of the event’s management team, was inspired by Collin, one of the CCMC children who has autism and “came out of his shell” during QTHON.

“[Collin usually] wears headphones so he cannot hear noise, and usually will hide behind his parents,” Coda said. “This was his first time in a crowd so big…he was on stage dancing with everyone, he was acting like a brand new kid. [His mother] was crying and couldn’t thank my team and I enough for all we do. It is a memory and moment I will never ever forget.”

In addition to dancing, QTHON participants could stuff a teddy bear for $5, participate in raffles, and visit the “Instagram Station,” where students took Instagram photos with their teams, uploaded them with the hashtag #QTHON2015, and received laminated copies of the photo. There were also performances by university dance teams and acapella groups.

Junior Aldo Servello attended with his service fraternity, Alpha Phi Omega, and was impressed with the event’s growth since the first QTHON in 2012.

“The fact that it has increased four folds in the last three years is amazing,” Servello said. “Seeing the students of QU that came out for the cause was great. I think the event was absolutely a bonding experience [for my team].”

Senior Erica Seamon, another member of Alpha Phi Omega, said that her favorite part of the event was listening to the Miracle Families talk about their experiences with the Children’s Miracle Network hospitals.

“It really allowed the participants to connect with what they were participating in even more,” Seamon said. “I would recommend QTHON to others because it was a fun night to spend with your friends and classmates, and know that you’re doing something to make a difference for the kids.”