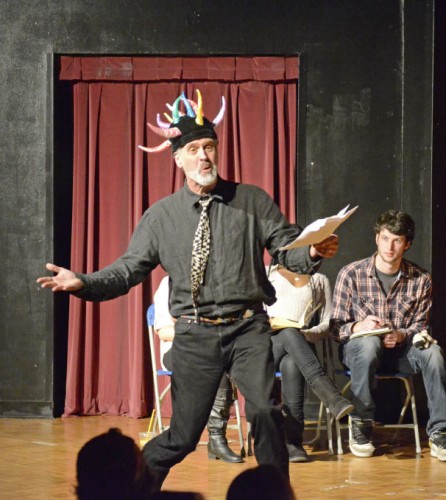 “I discovered that I am part of this new faculty conversion program during the tenure year. Soon I will be offered tenure, and with it conversion. I and other new faculty can become the monsters of our choice,” Professor O’Neill said in her performance.

“Seeing the picture she presented of Professor Dansdill’s true form, a silver humanoid with razor sharp claws, was both illuminating and horrifying,” he said. “I thought it was awesome that she was able to engage the other contestants in her piece.”

Nearly 30 students and faculty went to Buckman Theater on Feb. 26 to witness Word War I, a literary slam co-hosted by Sigma Tau Delta, the English honors society, and Montage.

The literary battle was between four professors who competed against each other. There were three student judges who decided who was the best writer for each round.

The competition was separated into rounds with the winning teacher moving forward. The host of Word War Tanner Celestin told attendees to throw paper airplanes at the contestants if they read for longer than the seven minute time limit.

Professor Kimberly O’Neill won the first Word War after tieing and beating Professor Ken Cormier in a bonus round.

Professor Timothy Dansdill competed in the first Word War and even came up with the name.

“[The students] had the structure for it, and I put the name on it,” Dansdill said.

Dansdill talked about the difficulties of getting more professors and students interested in ongoing English department activities.

“I think we’ve got a lot of talent that I think we need to tap,” he said. “Which puts a particular pressure or responsibility on Montage and Sigma Tau Delta and reach across to other fraternities and sororities to see who they can bring. There is a possibility of really building a community here.”

Dansdill was among three other professors who competed in the Word War. Professor O’Neill, Professor Cormier and graduate Danielle Susi also competed.

Sophomore and judge for the Word War Jessica Simpson thought the event was fun and well organized.

“I thought the event went very well for something that was put together in almost an instant,” she said. “Kira, Rachel and Tanner definitely did a fantastic job in making it a fun and entertaining event.”

Though she loved all the performances, Simpson said her favorite performance was by Professor Dansdill.

“He made his entertaining and put on a bunch of different hats to be different characters,” she said.

The performances ranged from singing by Professor Cormier to satirical diary entries by Professor O’Neill. Each round had it’s own theme that the contestants had to compete in, such as a “Price is Right” round where contestants answer Quinnipiac related trivia.

Sophomore Manny Gomez thought the event was entertaining and interesting.

“You know it is always fun to have this type of art displayed,” Gomez said. “To me it’s just something that is really important for college life.”

Gomez hopes to see more events like this one on campus.