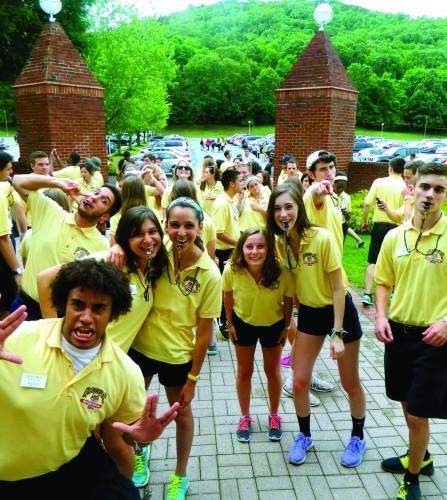 With spring comes a new class of high school graduates choosing Quinnipiac as their college–and a new team of orientation leaders to welcome them to their new home.

In February, 165 students applied to become orientation leaders, and in less than a week 39 were hired for the upcoming summer, according to Erin Twomey, associate director of campus life & new student orientation. Students interested–close to 300 this year–attended information sessions, where they were given applications to fill out.

Beyond this standard application, applicants are also given a grade and conduct check–they have to be clear under the university’s code of conduct and have to have a GPA of 2.75 or higher. Those who pass these checks are given a group process interview, where applicants are put into small groups to test their cooperation.

“You sit at a table with a bunch of other OL applicants and one professional staff,” said Chris Desilets, 2017 class president and an orientation leader last summer. “They’ll give you a problem… they’re not worried about if you’ll get it right, they’re just trying to see how you interact with everybody.”

Junior Alison Kalinowski, who applied to be an OL for her second time this year, her first being when she was a freshman, says that although it was, “nerve-wracking,” to know what to expect from the application process, she felt comfortable around the other applicants.

“They were all genuinely nice people and treated everyone in the room with respect. There was no competition for who can outshine the other,” said Kalinowski.

After these group sessions, grades are given and cuts are made. According to Twomey, about half of the applicant pool is invited back for personal interviews with professional staff.

“They typically run around 20 minutes or so,” said Twomey. “From that process we’ll make the decision of who we’ll hire on staff.”

“I was really excited that I heard back four days later,” she said. “It came as a complete shock since I was expecting to heart back a week later, but it put my mind at ease and started off my midterm week on the right foot.”

Those who have been accepted will have a few more informational sessions to attend this spring. Then, the week after the end of this school year, they will have a week of training before their first session of new Bobcats.

“The first day [of an orientation], you wake up at 5 a.m., you go get breakfast, and then you go and just start pulling kids out of their cars,” Desilets said. “We’re probably done around midnight, then we wake up around 6 a.m. the next day…There’s not much sleep once you’re actually in session.”

Despite the work-load and no past experience required, Twomey is certain that the orientation training program covers everything to ensure a smooth transition for new students.

“Theres a lot of training that they go through all in preparation on how to assist a new student that’s coming here, how to be the best guide and resource for them–how do you navigate them to help being here,” Twomey said.

After four sessions in July and one in August, Desilets remembers a summer that was not just a lot of work, but also a lot of fun.

“I just had so much fun at my own orientation this was just something I had to be involved in,” Desilets said. “[The application process] was enjoyable, I wish we got to do it again this year because returners have a different process… the summer was exactly what I expected and it really was a great time.”

Returning OLs have always had a different process than the newcomers. Although they also need a background check and an application, they are then assessed by their fellow OLs and from there staff decides who may need to be interviewed who may need some improvement or the push to step up.

At the end of the day, whether returning or new, Twomey and her staff are looking for OLs that, “mirrors the campus body.”

“We have 6,500 students here and everyone is different, so we want a diverse staff that has different passions and different interests, different experiences and backgrounds,” Twomey said. “It’s a variety of students and it needs to be, they need to be able to relate to 1,800 new students coming in from different walks of life.”

Kalinowski wanted to be an orientation leader to, “shine a positive light on the Quinnipiac community.”

“I know how scary it is being in a completely foreign place and how hard it is adapt without having someone you trust to guide you,” she said. “I’m excited to show them how liberating it is to be out of that high school bubble… If I can make a difference in at least one person’s life, I will consider this summer session a huge success.”