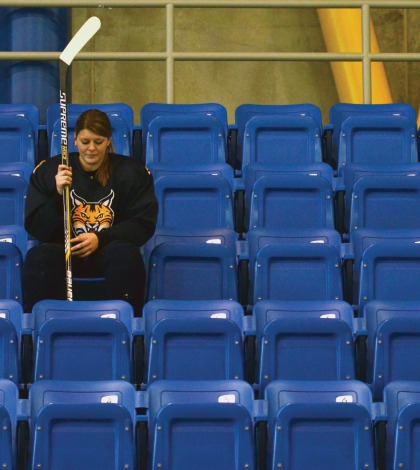 For Quinnipiac men’s basketball freshman Ayron Hutton, living on a college campus during the winter recess is not only evident in the desolate dormitory, but also in a lifeless arena.

“It’s tough because nobody is here, other than the athletes,” Hutton said. “There’s not a lot to do at Quinnipiac during this time. The shuttles do not run and everyone seems to just relax in their room all day.”

Hutton added that he enjoys the games much more when students are on campus.

“Myself, and I think the team, can really tell the difference during the basketball games at the [TD] Bank [Sports Center],” Hutton said. “You can see the crowd total drop off during the games and there are a lot more empty rows of blue seats when we play.”

Hutton, a native of Virginia Beach, VA., feels sad about the lack of activities on campus. This coincides with time away from his parents and siblings.

“Being away from my family was very difficult,” Hutton said. “It was one of the first times that I was not around with my family during New Year’s Eve. Not only that, but I miss my family in a general sense too. We’re a close bunch.”

Adjusting to the situation, Hutton followed suit with the other athletes on campus and enjoyed some leisure.

“When I was not on the basketball court, I spent a lot of time sitting in my dorm and playing video games, watching television and going to the gym,” he said.

However, Hutton also made notice of the winter holiday’s impact on the improving relationship between himself and his teammates.

“I always enjoyed spending time with my teammates. But, living with them and only them during the break made me love being around my teammates,” Hutton said. “The experience definitely helped us grow as a team and we formed a stronger bond over the winter vacation.”

Aside from participating with his teammates in actual basketball activities, Hutton and other members of the Quinnipiac men’s basketball team kept basketball as the dominant theme during their time together.

But, perhaps the best part for Hutton and other Quinnipiac athletes is enjoining the Athletics and Recreation IMaGinE Committee, led by Alyssa Budkofsky, assistant athletic director and the men’s basketball team’s academic support service.

“Being a part of the IMaGinE program has been an awesome experience. I have gotten to meet the other Quinnipiac athletes. I’ve met many of the hockey players and talk to many of the female athletes around campus,” he said.

Hutton added that student athletes on other winter teams live in his dorm, and he participates in activities with them, as well.

“I spend some of my time playing ping pong with a few of some of the student athletes that live in my dorm,” Hutton added.

For women’s ice hockey junior Cydney Roesler, the emptiness can be nice when the only students on campus are the basketball and hockey teams.

Contrary to Hutton, Roesler actually enjoys the quietness in its entirety.

“It’s kind of nice just having the four teams here,” Roesler said. “I like it a lot.”

The women’s ice hockey players went home this season from Dec. 16 to Christmas day. Despite coming back on the holiday, Roesler was able to spend time with her family on Christmas morning, which she said she enjoyed.

Although some athletes would come back to a room all to themselves, Roesler lives in Westview with seven of her teammates. Despite being with her roommates for the entirety of break, Roesler said that she does not mind the common company.

“We spend a lot of time together. I’m used to them. They are good people to be around,” Roesler said.

Roesler added that the team kept her occupied during most days on the vacant campuses.

“We come to the arena and do a little special teams in the morning, do some video, have some lunch and get back on the ice for full team practice. Sometimes we would lift, too,” Roesler said.

Roesler said the four teams don’t usually intermingle with one another, largely due to the fact they are all focused on getting better in their sport for the second half of their schedules.

“Our schedules are kind of different when we’re traveling and they are home,” Roesler said. “We see them during the week, but on the weekend it is sort of tough with games.”

Roesler works at her training facility in Canada when she is back home. However, she was unable to work over her nine-day trip home and does not have a job when she is at school.

So she resorts to a common practice among college students to pass the time.

“I watched a lot of Netflix. ‘Sons of Anarchy’ is the one I watched over break,” Roesler said with a grin.

The school does not provide dining services for athletes over the winter break. and Roesler is also without a car on campus. She relies on teammates to drive her to get food to cook in her Westview dormitory over break.

“The teammates are pretty good about giving rides to the grocery store. It’s not too bad,” Roesler said.

With all of the emptiness on campus, Roesler said it is an adjustment once other students come back to campus.

“It is weird having people around again. Things are busier and you get back into the swing of things,” she said.

Ultimately, Roesler likes having the campus to just the winter sports teams and her teammates.

“They are like a family to me,” Roesler said.
It’s fun to hang out with them and be with them every day. I enjoy it.

Like Roesler, staying on campus over break isn’t a problem at all for baseball’s Scott Donaghue.

Donaghue embraces the company of his teammates over Quinnipiac’s spring break every March as they wait for the snow to melt and the season to begin.

“You get to do a lot of fun things with your teammates,” Donahue said. “We go to the driving range and we go out to eat a lot, which makes it fun.”

Scott noted that the school opens the cafeteria for students when they need meals, meaning they don’t have to leave campus every time they need food.

Donaghue also noted the change in housing, which he said can be fun at times.

“If you’re on campus you’ll get moved up to York Hill, we only come to the [Mount Carmel Campus] to practice,” he said.

In addition to being on campus during spring break, the baseball team and softball teams often stay after school ends, as well.

“Actually the spring is the best part because you don’t have to worry about school, you only have practice and games so you get to do a lot of fun stuff,” Donaghue said.

Like Hutton, Fountain acknowledged the challenges she faced staying on campus over winter break.

“Living on campus by yourself is hard, especially when you are living in the dorms,” Fountain said. “It was just me and one of my teammates I was rooming with at the time, and we both wanted to go home because we didn’t like how empty it felt in our room.

While on campus over break, Fountain went on a team building trip to Denver her freshman year and stayed in her campus housing the three other years to prep for the spring sports season.

“While we are here we have practice every day, and a few games are planned, as well as scheduled meals to make sure we are on a regimented plan,” Fountain explained. “Sometimes, especially now that I live off campus, we will have team dinner at my house or one of the other captain’s house. Regardless, [Quinnipiac women’s lacrosse head] coach [Danie] Caro always has something planned to keep us busy.”

Fountain also said that she’s enjoyed many other parts of her times on campus, and that it’s not all bad.

“It is nice and quiet here because it is kind of just us,” Fountain explained, “We don’t have to deal with the hussle and bussle of the other people on campus, especially when it comes to the gym and weight room, because we only have to plan around men’s lacrosse and other spring sports that are here.”

Fountain said, though, that the fun she has on campus doesn’t equate to the time she’s missing with her family.

“[Coach Caro] did a good job keeping us busy, and keeping us from being lonely, but obviously you would like to go home and be with your family sometimes,” she said.