After senior Lexie Gruber posted on Facebook that she was offended by an advertisement for a sorority’s annual philanthropy event, students insulted her and threatened her on social media sites such as Yik Yak.

When Gruber saw a poster for the event on a Kappa Alpha Theta member’s Facebook, she commented on the photo, saying the maracas on the ad were offensive because they stereotyped Mexicans.

Some Kappa Alpha Theta chapters across the country hold the Queso for CASA event where members sell Mexican food to raise money for their philanthropy, CASA or Court Appointed Special Advocates, an organization which helps foster children.

Gruber is both a Latina student and a former foster child. 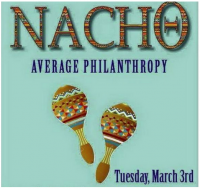 “As a Latina student at Quinnipiac I find this incredibly offensive,” Gruber commented on the Facebook of sorority member and Student Government Association Vice President for Public Relations Carly Hviding. “I support your mission and philanthropy, but ask that you respect the culture of others and do not appropriate it in stereotypical and offensive ways. I don’t mean any harm, just want to point that out.”

Another Kappa Alpha Theta member, junior Elizabeth Thompson, commented on the post, questioning why it was offensive. The sorority has held this event for years, she said, and no one has had a problem with it. The post got 26 “likes.” Thompson, Gruber and other students went back and forth in the comments, with many saying the poster was not offensive.

But Kappa Alpha Theta’s executive board said it realized the ad was offensive and decided on Monday to cancel the event, originally scheduled for Tuesday, March 3

“We are leading women of the community and on campus and it was in our best interest to cancel the event,” President of Kappa Alpha Theta Julia Gonsalves said. “We don’t stand for any discrimination and we wanted to cancel it and revamp it so that it will not be offensive to anyone on campus.”

This decision was made in conjunction with the national Kappa Alpha Theta headquarters and the chapter’s advisors, according to Director of Fraternity and Sorority Life Courtney McKenna. 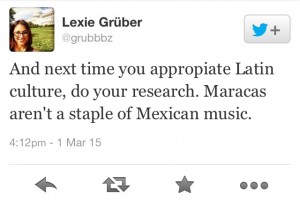 Many Greek members thought the university forced Kappa Alpha Theta to cancel the event. Greek chapters and members posted on Facebook and Twitter that they could not wait for the event to be reschedul

ed. The Panhellenic Council has since asked the Greek organizations to take down their posts.

Other Greek life members, orientation leaders and other student leaders took to their personal social media accounts to post what Gruber said were rude comments about her and her views.

Gruber received a Facebook message from a Quinnipiac alumni who said his friends were getting in trouble with Campus Life for their comments about Gruber. He encouraged her to contact Erin Twomey, associate director of campus life and new student orientation, and explain her side of the story.

When Gruber went to meet Twomey and McKenna, they explained that they had been looking into this since Sunday night and reprimanded certain students.

Junior Isaiah Lee, who is not involved in Greek life, said he was disappointed with the comments students made about Gruber.

“What I didn’t like was how [some students]….responded to this issue – talking about this girl physically, harassing her, threatening her,” Lee said. “I think that sends the message to surrounding universities – because, you know, this is on a national platform – that our campus is not tolerant or insensitive and we’re closed-minded. And, on top of that, we’re misogynistic. When a woman speaks out, this is how males respond to it.”

Over on the anonymous app Yik Yak, students posted about Gruber all day. Students posted statements such as, “Lets (sic) deport Gruber” and “I hope Gruber steps on a lego…did i (sic) say lego? i (sic) meant ‘falls’ off the top of sleeping giant.” 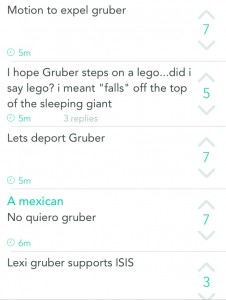 After someone on Yik Yak posted that he or she wanted Gruber’s address, Gruber went to the Hamden police. Although Yik Yak is known to be an anonymous app, Hamden police told Gruber it can find out the identities of the posters.

“I’ve gotten a threat to my physical safety, people who have wanted to find my address,” Gruber said. “I have spent the entire day crying and scared for my own physical safety. What they saw as simple silencing is so much more than that. It’s a really sad day to be a Bobcat. I’m really ashamed to call these people my peers.”

But Gruber said the people bullying her were not Kappa Alpha Theta members or Hviding.

“There have been members of the Greek community who have said ‘this is not representative of us’ and you know ‘I really want to apologize on behalf of these people’,” she said. “But there have just been so many students who are in leadership positions, who are orientation leaders, who are on student government saying really terrible things.”

The Panhellenic Council released a statement saying it was “disheartening” to see members of the Greek community behave this way.

Erinn Magrosky, vice president of communications for the Panhellenic Council, said she felt bad that Gruber had to deal with these comments.

“When we saw what happened we were kind of taken back,” Magrosky said. “It’s like your heart goes into your stomach kind of thing because we’ve never experienced anything like this, so it’s like how do you deal with it?”

Magrosky said the Panhellenic Council is taking the situation very seriously. McKenna also said the sorority does not plan to reschedule Queso for CASA.

“People really like the event in of itself but I think the chapter leadership have been really reflective about the event and maybe there are some other ways to raise money for CASA,” McKenna said.

Kappa Alpha Theta started a GoFundMe to raise money for CASA and have raised $505 as of 1 a.m. on Wednesday. The sorority’s goal is to raise $5,000.

Gruber emphasized that she supported the event. As a foster child herself, she had her own CASA representative who helped her when she was young.

“I don’t think there is anyone on campus who knows how important that is more than me. I say that because I was the kid who had to find a family through the CASA worker,” she said.

Lauren Beardsley, a Kappa Alpha Theta member and the president of the Panhellenic Council, said she never thought about how using the maracas on the poster could be culturally insensitive until Gruber pointed it out. She said the Greek community needs to use this as a learning experience.

“We are going to see what we can do to further understand these cultural differences within our community and maybe bring in some sort of a speaker or programming from it,” she said. “Of course it’s so upsetting at first, but you have to find a way…to get something from it because otherwise if it happened it would be so pointless and awful.”

Gruber said no one has to agree with her opinions on issues like race.

“What I see as correct isn’t objectively correct, it’s my version based on my experience,” Gruber said. “And someone else can say ‘hey Lexie I have had different experiences and because of that I think this’ and we can have a really great discussion about race and gender and other issues. But what I have found through this is, if you speak outside of the norm, you will be silenced. And that is so absolutely terrible at any liberal arts institution.”

This piece was updated on March 5 to clarify that Hviding did not bully Gruber.