Acrobatics and Tumbling falls to Oregon 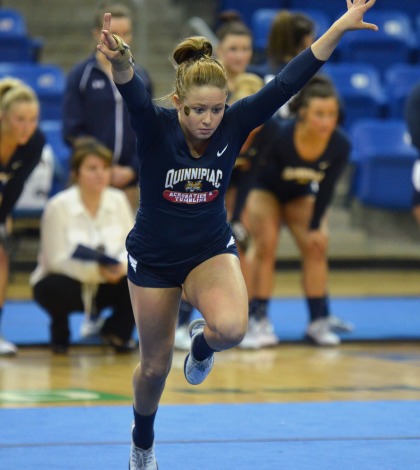 The Quinnipiac University acrobatics and tumbling team hosted Senior Day at the TD Bank Sports Center on Sunday afternoon against the Oregon Ducks, who entered play at 9-1 overall.

The team captains try and keep everyone focused and excited even when they are trailing behind.

“[We try to] stay in our bubble, it’s never over until the end and we just try to keep it one temp at a time,” senior captain Stephanie Palange said.

Quinnipiac has three more regular season matches and then nationals. Senior captain Cara Seckinger knows what it will take for the team to stay motivated through the next matches.

“We had a couple issues today but we’re definitely gonna work hard and come back stronger next time,” Seckinger said.

Powers said the biggest disappointment for the team was going down three points in the toss round, since they usually win that event in most matches.

“They were in the game for the first half, I don’t know who showed up in the second half,” Quinnipiac head coach Mary Ann Powers said.

Powers added that the team’s fear hindered its ultimate success.

“I learned some things today, and that is that a little fear is going on,” Powers said. “Everyone makes mistakes, it’s okay to be human. But it’s that fear of making mistakes that you got to get over.”

The tumbling solo passes have the most to be nervous with, Powers added.

“Those three women on my team are gameday kids.”

Senior captain Christine Rochester is one of the solo passes. Rochester deals with the solo pressure by reminding herself that this isn’t the first time she’s done this.

“I just tell myself that I can do it, I’ve done it a million times and this is no different than doing it at practice,” Rochster said. “I just go as hard as I can and no regrets after.”

With the loss, Quinnipiac falls to 1-2 on the season. The Bobcats are back in action at home on March 10.