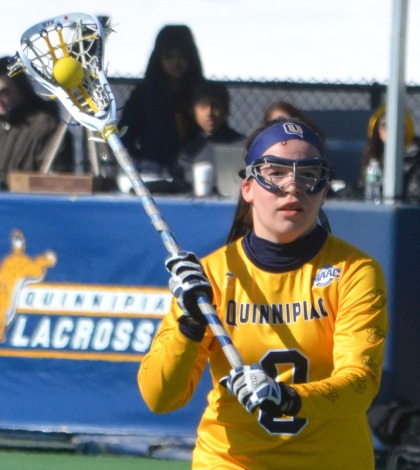 The Quinnipiac women’s lacrosse team fell to the Binghamton Bearcats 11-8 on Saturday afternoon at the QU Turf Field. Despite outscoring the Bearcats 6-2 in the second half, the Bobcats couldn’t come back from from a 9-2 deficit at halftime.

Kathleen DeVito scored a hat trick and Aileen Carey added two goals on the afternoon for Quinnipiac. With the loss, the Bobcats fall to 0-3 on the season.

“All of us girls feel good about ourselves on how we played even though we lost.,” Walter said.

Binghamton came out with an early lead, scoring four goals in the first 10 minutes. Thirty seconds after Renee Kiviat’s goal made it 4-0, Devin Kelly put Quinnipiac on the board with an unassisted goal.

Carey put in her first goal of the game four minutes later to make it 4-2. Binghamton then scored five-straight goals to end the half, including three from Sophia Racciatti. In the first half, the Bearcats outshout the Bobcats 19-7.

The Bobcats came out looking like a different team in the second half, outshooting Binghamton 10-7 and holding possession more than the Bearcats.

“At halftime we all agreed to give it our all for a full 30 minutes,” Walter said.

Callon Williams continued the momentum for Binghamton with a goal a 1:30 into the second half. DeVito then ran off three-straight goals to bring Quinnipiac within five goals.

After an Alex Fisher goal for Binghamton, Quinnipiac scored another three straight goals to create a rally. Down by three with 13 minutes left, the Bobcats couldn’t get a real scoring chance to finish off the comeback and eventually fell by three.

The Bobcats play University of Connecticut at home before going on a six-game road trip. Walter believes that the team has to improve on what they lacked today.

“We need to work on communication and good defense,” Walter said.