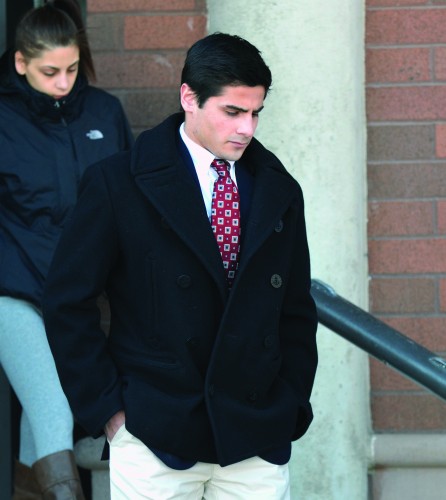 The injunction hearing for sophomore and former Tau Kappa Epsilon member John Demoulas has been completed. But the judge’s decision is still pending at the time of publication, according to Demoulas’ lawyer.

If the judge rules in Demoulas’ favor, he will be allowed to return to campus this semester, despite originally being suspended until Aug. 16.

The hearing began on Thursday, Feb. 19 and was completed on Monday, Feb. 23.

Demoulas was suspended for the spring 2015 semester for allegedly sending out a group text message to new members of Tau Kappa Epsilon to clean vomit in his on-campus suite, according to Director of Student Conduct Megan Buda’s testimony in court on Thursday, Feb. 19. This type of behavior is classified as hazing in the student handbook, according to Buda.

But Demoulas testified that he and his roommates never had alcohol or parties in their room and that they did not ask new members to clean vomit from their room. University officials also never saw a copy or any other proof of the alleged group text message, according to Buda.

According to Demoulas, new members were invited to his room from time-to-time to play videogames or watch movies, but they were never asked to take commands from upperclassmen. He said Tau Kappa Epsilon members living off campus would have members–including new members–over their houses to watch football games.

During the hearing on Thursday, Buda testified she received witness statements from Assistant Dean and Director of Campus Life Daniel Brown, who was also the advisor for Tau Kappa Epsilon. However, Buda said she was uncertain whether or not this was a document, email or in some other form.

The lawyers representing Demoulas subpoenaed the documents relating to Demoulas’ suspension, but Buda said she was uncertain where the information from Brown was, since it was not included with the other documents.

Buda admitted she could have talked to Demoulas to obtain his side of the story before formally suspending him; however, she said she chose not to because she believed the evidence against him was significant enough to suspend him.

Demoulas said he asked Kalagher when the alleged incident had occurred during his conduct meeting and Kalagher told him, “You know better than I would. The first couple of weeks of October.” However, Kalagher testified that he did not say this, but did encourage Demoulas to make better decisions.

Buda testified to not truly knowing whether or not Demoulas was even on campus or in his room during the alleged vomit-cleaning incident because witnesses were unable to give an exact date of the event, but said it occurred in mid-October.

Michael Carroccia, former Tau Kappa Epsilon member and direct roommate of Demoulas, testified that Demoulas spent a majority of his time with his girlfriend. Demoulas’ attorneys used this as a supporting factor and said Demoulas may not have even been in his room when the alleged incident was said to have occurred since there was no exact date.

Though Kalagher said he gave Demoulas the option of an extension for the appeal process, Demoulas did not take the extension.

As the associate dean of student affairs, Kalagher oversees the conduct process. He addressed the hazing policy on page 72 of the student handbook and said he believed the university had grounds to suspend Demoulas.

“We don’t go into a conduct meeting hoping to suspend students,” Kalagher said. “[I want] John to return and be a successful member of the Quinnipiac community.”

Drucker, who conducted the appeal for Demoulas’ suspension, said she did not grant him the appeal because he did not have any new or additional information about the incident that would change the outcome of the decision.

However, Drucker testified that she did not fully review the 30-page incident report from the Department of Public Safety, which Demoulas’ lawyers questioned as not being a “fundamentally fair” appeal because she did not have all the information at her disposal.

Still, Drucker maintained her belief that Demoulas did not present what she believed to be sufficient enough evidence for her to grant the appeal.

During his closing arguments, Demoulas’ attorney Michael Lynch said this case was not one he took lightly. He said the fundamental fairness students are guaranteed by the student handbook is intended to protect the students.

“I think fundamental fairness has failed in this case,” Lynch said.

Fischer questioned whether the injunction would be beneficial to Demoulas since federal law states that a student must attend a minimum of 15 weeks of a semester in order to get credit for the semester.

Lynch said he was certain Quinnipiac would find a way to accommodate Demoulas–should he be granted permission to return for the remainder of the spring 2015 semester–since the university put him in the difficult situation to begin with.

When Fischer questioned Matthew Conway, one the attorneys representing Quinnipiac, the judge said he believed Demoulas was fully entitled to know a specific date in correlation with the alleged hazing incident he was accused of.