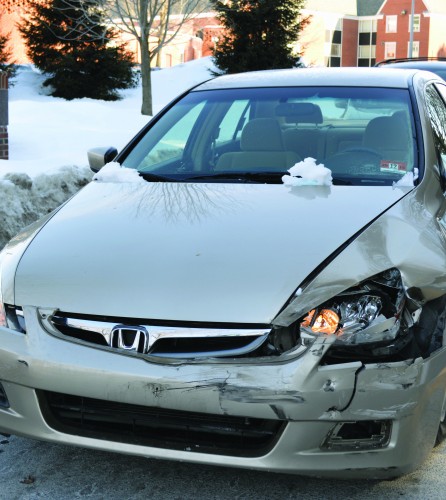 By: Sarah Doiron and Nicole Hanson

A York Hill shuttle filled with students collided with a car at the university’s New Road entrance on Feb. 24 at 9:05 a.m., according to Associate Vice President for Public Relations John Morgan.

A Honda Civic was exiting the Mount Carmel campus when the shuttle cut the corner and hit the front bumper of the car. Both the Civic and the shuttle sustained damages.

No injuries were reported from the accident. It is currently unclear if the person driving the Civic was a faculty member or a student.

Junior Maddie Eldredge was on the shuttle when it hit the Civic.

“Everyone sitting on the side that the accident happened on screamed and then I felt the bus hit the car,” she said via Facebook messenger.

Eldredge said everyone on the shuttle was told to stay there until the Hamden Police allowed them to get off because the accident did not happen on university property.

“We were probably on the shuttle for like 10 or 15 minutes until we were told we could get off,” she said. “I think everyone who was on the shuttle’s main concern was if the person in the car was okay.”

Senior Kerrigan Murray was on the shuttle that collided with the Civic, but said she wasn’t paying too much attention before the accident happened.

“We were turning into the New Road entrance [and] all of the sudden there was a really loud noise and a gasp from a few girls as we hit the car,” Murray said. “The shuttle driver jumped out of his seat to make sure the girl was okay and got on the radio to Public Safety.”

Murray said Public Safety arrived on the scene immediately to ensure no one was injured in the accident. She and junior Michelle D’Agostino said the students had to stay on the shuttle to give Public Safety and the Hamden police their names.

D’Agostino said she was on the right side of the shuttle and could only hear people screaming before the collision.

“I was shocked, everyone always jokes about the shuttles getting into an accident but it was scary because you felt the shuttle get pushed,” she said.