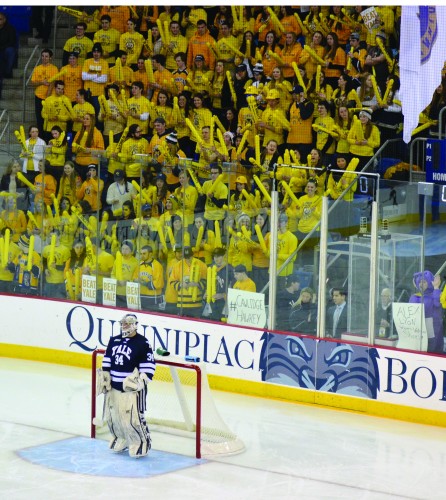 Ten o’clock strikes on the evening of Feb. 17, and the student ticket portal is open on nearly every computer connected to BobcatNet. Within minutes, each student ticket for the Yale vs. Quinnipiac men’s ice hockey game was reserved, leaving thousands, of ticketless Bobcats flustered and frustrated.

One student who was originally left without a ticket is freshman Lauren Birdsall, who was too late in her attempt on the student ticket portal.

“I tried to get my ticket off of the portal, and before I knew it, they were all sold out,” Birdsall said.

However, her efforts did not end there. Birdsall was determined to be one of the 3,696 people to witness the rivalry in Friday night’s game.

“A few days later, I started getting in contact with people on Facebook whom were selling tickets,” Birdsall said. “I got in contact with many people and finally found someone I was able to buy a ticket from. It felt unreal to know I was going to such a huge game for our school.”

Another student, freshman Paul Caracciolo had some trouble with the ticket server as well.

“I was clicking refresh so fast,” Caracciolo said, “but I didn’t realize the system crashed so I gave up too early”.

Tickets being sold by students on Facebook ranged in price from free to more than $100. On the day of the game, prices on StubHub, which is an online ticket marketplace, ranged from $49 for standing-room-only to $587 for just one seat in section 107. Although students can purchase standing-room-only tickets from Quinnipiac for a discounted rate of $5. The reason for these prices is likely due to the popularity of the game, but also because tickets were actually sold out before they would have become available to the public, according to Group Sales and Promotions Manager David Caprio.

Caprio explained how season ticket holders were allowed to reserve up to four tickets each for this game as they have access to Preview Week, which is a week before tickets go on sale to the public. This gives season ticket holders the ability to purchase additional tickets prior to public access.

Students fortunate enough to gain access to the event had to arrive close to 4 p.m. if they wanted to sit in one of the approximately 700 seats in the student section, according to Birdsall.

“I sat in the student section behind the net and I got to the rink at about 3:30 p.m. and waited until we were allowed in,” Birdsall said.

However, Birdsall said it was well worth the wait.

“It was an incredible experience,” Birdsall said. “Best time of my life.”

Caprio acknowledged that the system used for student tickets is not flawless, but they are trying to make everyone happy.

“We are growing and we have almost [6,500] undergraduates and only 1,000 student tickets,” Caprio said. “It’s hard to make everyone happy. It is not a perfect system, but right now I think it is the best one we have.”

Caprio stressed their openness to new ideas regarding the improvement of the current ticketing system.

“If any students have a better way to do it, a serious proposal, to say hey look we really think this could work better, we are really happy to hear it and consider it and go over it,” Caprio said. “We want [the students] here as much as possible.”