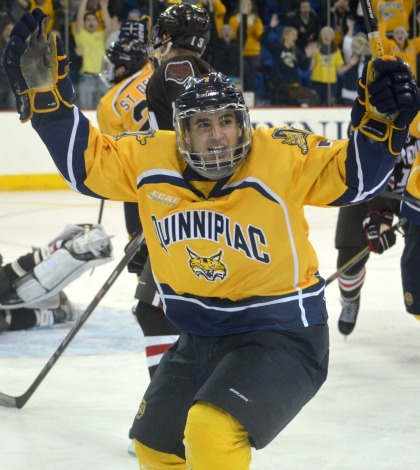 The Quinnipiac men’s ice hockey team clinched its second Cleary Cup in three years after a come-from-behind 2-2 tie against the Brown Bears on Senior Night.

“I am real proud of our guys for winning the Cleary Cup,” Quinnipiac head coach Rand Pecknold said. “It’s not easy to do in this league. It’s a tough league and night in, night out you have to grind it out.”

The Bobcats scored two third-period goals to come-from-behind and tie the game, and the team’s played to a scoreless overtime period.

Tanner Macmaster nearly put the puck past Brown goalie Tim Ernst from the red line with six minutes left in the opening period, but Ernst made a pad save. With one minute remaining in the period, a Landon Smith shot ricocheted off the left post to keep the game scoreless through 20 minutes.

Joe Prescott netted his third goal of the season to put Brown up five minutes into the second period. Prescott took the shot from point-blank range and blasted it over the left shoulder of goalie Michael Garteig.

Brown pulled ahead again midway through the period. Nick Lappin scored a backhand goal on a breakaway to score his tenth goal of the season and give Brown the 2-0 lead.

The Bears finished the second period on the power play following Soren Jonzzon’s second boarding penalty of the period. A number of body saves by Quinnipiac defenders kept the score 2-0 going into the final period.

“We were really flat the first two periods,” Pecknold said.

The tables turned in the final period.

“There was no doubt in our locker room,” co-captain Danny Federico said. “We knew if we stuck to our game plan, we would be successful in the third.”

Danny Federico scored his second goal in as many days on a power play to shrink the Brown lead to a single goal midway through the period. Tanner MacMaster and Justin Agosta assisted Federico for his third career goal in his last regular season game at the High Point Solutions Arena.

“I’ll tell you what, the kid can shoot a puck,” said Pecknold.

Sam Anas tied the game less than two minutes later. Bo Pieper and Travis St. Denis assisted Anas on his 17th goal of the season as he slid the puck beneath Ernst.

MacMaster earned a game misconduct for a boarding penalty that sent Prescott head-first into the board in front of Quinnipiac’s bench. The Bobcats held off the penalty in the last three minutes of regulation to send the game into overtime at 2-2.

“I think if we do not have to kill that five minute major, we come back and get another one,” Pecknold said.

Quinnipiac held down the remaining 98 seconds of the Brown power play. Justin Agosta sent a shot past Ernst that nearly gave Quinnipiac the win but deflected off the cross bar with two minutes remaining.

Each team played the final minute of the extra period a man down after Brown’s Mark Neclerio earned a hooking penalty and Jonzzon earned one for embellishment.

Ernst saved a shot by Federico as the final horn sounded to solidify the 2-2 tie.

“It is a tough way to tie, but it was good battling back,” Federico said.

The Bobcats rest atop the ECAC standings with 33 points and a 15-2-3 record after two ties this weekend. Quinnipiac’s remaining games are at Harvard and Dartmouth.

“I am proud of our effort, how we competed, and how we battled this year. We are happy to have it back,” Pecknold said.