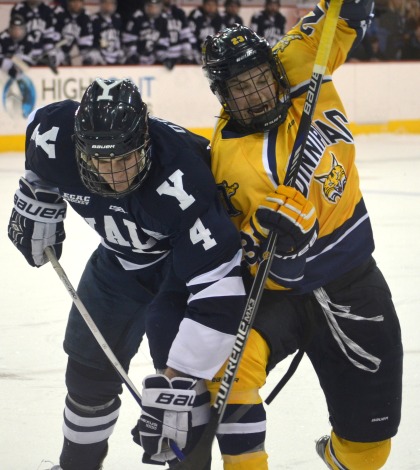 Quinnipiac and Yale are becoming accustomed to finishing in a tie when they meet in the War for Whitney Avenue.

On Friday, the Bobcats and Bulldogs skated to a 2-2 tie in front of a sold-out crowd at High Point Solutions Arena in Hamden. It’s the third tie between the two teams in the last two seasons, as well as the second consecutive tie in the Heroes Hat Game.

“I’m really disappointed with how we played tonight, I thought it was a poor effort,” Quinnipiac head coach Rand Pecknold said. “We definitely showed our immaturity.”

Both goalies, Quinnipiac’s Michael Garteig and Yale’s Alex Lyon, ended up with 23 saves on the night.

Garteig was busy at the end of the night, finishing with 13 saves in the third period and overtime combined.

“We got outplayed in the third period and overtime, and [Garteig is] the reason we got the point.”

The Bobcats struck first early with a Danny Federico goal. Tim Clifton passed the puck from behind the net to Federico at the left point, and the captain sent a weak wrist shot on the net that slipped past Lyons for the goal.

“The puck squirted out, and I just tried getting towards the net and Tim Clifton got the point for me by screening the goalie,” Federico said.

Yale’s Frank DiChiara evened up the score midway through the first period with a goal that snuck past Garteig into the open net after receiving a pass from defenseman Rob O’Gara.

Quinnipiac couldn’t hold its 2-1 lead, however, ending the game in a 2-2 tie.

“We came out poorly in the second and third, and just lost our poise and composure,” Federico said.

The Bulldogs tied the game up midway through the period with a two-on-one goal by the hands of Rob O’Gara. O’Gara snuck the puck past Garteig on a Matt Killian pass to tie things 2-2.

Quinnipiac had four power-play opportunities in the game, three coming in the last two. Still, the Bobcats came up empty in all man-up situations.

“It was awful, we had no poise and just panic.”

With the tie, Quinnipiac stays on top of the ECAC standings with 32 points. Yale, meanwhile, sits at third with 23.

The Bobcats play their last home game of the regular season against Brown tomorrow night at the High Point Solutions arena, with puck drop slated for 7 p.m.