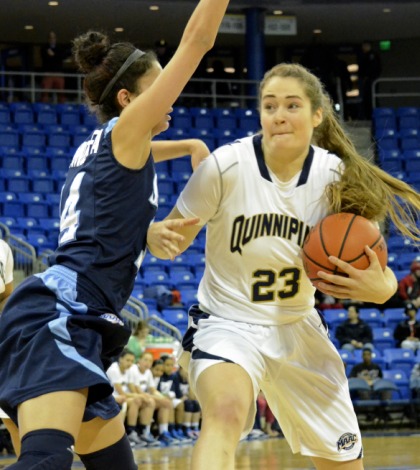 Coming into its last home game against Saint Peters, the Quinnipiac women’s basketball team was undefeated at Lender Court in the 2014-15 season.

In the team’s final home game, and the last game in Hamden for its six seniors, Quinnipiac defeated the Saint Peter’s Peacocks handily by the final score of 82-52.

Senior center Val Driscoll led all scorers with 14 points, while also adding 10 rebounds in the win.

“With the edition of Val this year, this group… their impact to the program was immediate and now they have elevated this program to new heights,” Fabbri said of her senior class after the game.

The Bobcats dominated early defensively, holding Saint Peters to 17 points and a 22.6 percent field goal percentage from the floor in the first half. Quinnipiac, however, wasn’t quite so polished on offense either, shooting only 27.5 percent in the first 20 minutes.

Quinnipiac then scored 49 second-half points en route to the win.

“What’s been so impressive about this entire group of young ladies is that they’re just so focused,” Fabbri said. “Theres never been too high or too low and its always been about taking care of business, and having some fun on the way, but they’re really just focused.”

Senior forward Samantha Guastella, who scored 13 points, was noticeably emotional as she fouled out late in the second half. She walked straight over to head coach Tricia Fabbri and gave her a hug, and Fabbri then began to pull her senior starters out one by one in a way to gran each of them their own final moment at home.

“Our group coming together as freshman all had the same mentality, which was we didn’t really want to be average,” Guastella said. “We wanted to be excellent.”

All five senior starters (Driscoll, Guastella, Gillian Abshire, Jasmine Martin and Nikoline Ostergaard) earned a standing ovation from the crowd as they came out of the game.

“We’ve been here for four years, every single day coming into the same gym working hard,” Abshire said. “It’s tough to leave what you call home, but the best way to do it would be to win the rest of our games and win a championship.”

Looking forward, the Bobcats have four more regular season games before the MAAC tournament. The Bobcats are a perfect 16-0 in MAAC play this season.

“I think our coaches really set the tone,” Guastella said. “This is a new task at hand it doesn’t matter who’s wearing what jersey, all we have to worry about is our squad and how were going to perform, and when we perform to our best, no one can beat us.”