Michael Sam to speak at QU 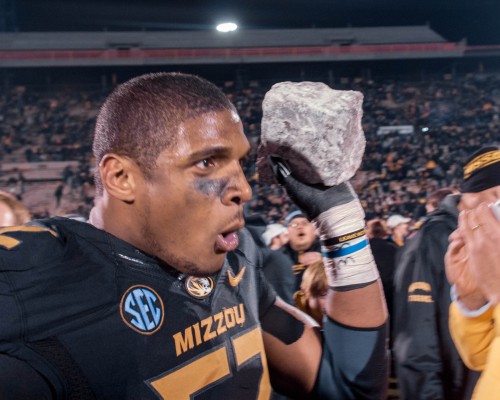 Michael Sam, the first openly gay football player to be drafted into the National Football League, will speak in an event at Quinnipiac on March 3 at 7 p.m., according to Associate Director of Campus Life Stefano Fasulo.

Sam, who is currently an NFL free agent, will have 60 minutes to speak at Burt Kahn Court with two moderators, though Fasulo said students will have input in what Sam talks about. It will be the first time Sam speaks at a college event.

“What I’ve expressed to the moderators, and to Michael and his agent, is that it needs to be organic, it needs to be very natural,” Fasulo said. “I think what we’re trying to go for is the truth and the honesty of his particular journey. He has life experiences that many of us don’t have.”

Sam was a consensus All-American in his senior season at Missouri, winning the Southeastern Conference Defensive Player of the Year.

The defensive end was drafted by the St. Louis Rams in the seventh round of the 2014 NFL Draft in May of 2014. The Rams kept Sam on the roster until the end of training camp, before releasing him in the final round of roster cuts on Aug. 30.

The Dallas Cowboys then added Sam to its practice squad on Sept. 3, before waiving him on Oct. 21 after he was unable to earn a promotion to the active roster.

“Depending on the industry, especially in athletics, somebody like Michael Sam might wait until after he has established himself before coming forth this way,” Fasulo said. “Here we have a young man who is identifying his sexual orientation in a same-sex relationship, in a hyper-masculine sport prior to establishing himself.”

Sam is currently continuing his quest to try and become the first openly gay player to make an NFL roster in McKinney, Texas. He is working out at the Michael Johnson Performance training center, according to the Dallas Morning News, trying to stay in football shape in the event that a team calls his representation.

“What his future football career looks like is something a lot of people question since his announcement. It became a part of his package,” Fasulo said. “It was no longer just Sam as a player with a particular skillset. That’s a big piece of this event that we will hold. We want him to speak on the hardships he’s dealt with.”

Fasulo said Sam doesn’t have a prepared package, and that the event will likely allow for some time at the end for questions from Quinnipiac students and faculty.

“We get to sort of build it and frame it in a way that’s applicable and relatable to the QU community,” Fasulo said. “It’s all about how students can extract some experience, some life lesson or perspective to apply to themselves or others to help in our world.”

Most recently, Sam spoke candidly in a documentary with Oprah Winfrey on Dec. 27.

In the sit-down interview, which aired on Winfrey’s OWN Network, Sam said that coming out as gay was the right thing to do.

The documentary also discusses what Sam called “the infamous kiss,” where television cameras captured a moment between Sam and his boyfriend, Vito Cammisano, after Sam was notified he was being drafted.

Since that time, Sam and Cammisano have gotten engaged, which was confirmed by a tweet from Sam in late December.

“Everyone made a big deal out of it,” Sam said to Winfrey, talking about the kiss. “It’s just a kiss. Did you forget that I was gay? Should I be kissing a woman instead?”

Fasulo added that the event wouldn’t be possible without the collaboration from Campus Life, Quinnipiac Athletics, G.L.A.S.S., the Department of Global and Multicultural Education and the Interfraternity Council.

More details on Sam’s appearance at Quinnipiac will be coming in the next few weeks. For now though, Fasulo said he is focused on finding ways to make the event successful.

“When I approached this project back in June of 2014 I had a vision, and now it’s actually happening,” Fasulo said. “My job now, and everyone else helping with this project, is to create an environment where Michael Sam can teach people through his experiences. He has so much to offer.”