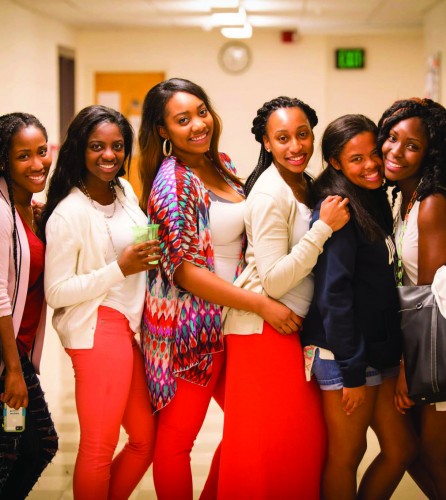 When you think of the month of February, what holidays come to mind?

Some students think Valentine’s Day, Groundhog Day or even the Super Bowl and forget that February is the official month to celebrate African-American history.

At Quinnipiac, the Office of Multicultural and Global Education (OMGE) works to organize programs to commemorate multiculturalism in the United States.

This year OMGE held five programs for Black History Month, including “Black History: True Beginnings,” a workshop which focused on aspects of black history that often aren’t discussed in the traditional classroom. Another event, “Liberty and Justice for All: An Examination of Racial Profiling,” dealt with the causes and consequences of racial profiling. At “Macklemore, Iggy Azalea and Cultural Appropriation,” students discussed diversity and social inequalities in the media.

“These events are very much led by students; it’s a safe place for them to have a conversation [about racial issues],” Diane Ariza, associate vice president for academic affairs said. “It’s like a home for students, especially underrepresented students, to say what’s on their mind, whereas in the classroom they might not feel like they can talk about it.”

Senior Aliya Clark, president of the Black Student Union, said she is happy that OMGE organizes these programs because they provide a type of education that typically isn’t addressed in classes.

“As an African-American I celebrate my history every day, not only during the month of February, because it’s a part of me,” Clark said. “But American education is almost becoming repetitive; it’s always about the same African-Americans throughout history when there’s so much more that has to be talked about. [People] know about some of our struggles, but they only learn part of the story.”

Her opinion is shared by Sade Jean-Jacques, OMGE’s assistant director for multicultural education.

“It baffles my mind sometimes when people act like black history is separate from American history,” Jean-Jacques said. “A lot of times black history is condensed and narrowed, so I think Black History Month can shed light on a lot of information that folks weren’t aware of.”

She saw evidence of QU students’ lack of education in racial matters during the Ferguson protest last semester, when a group of students and professors re-enacted a die-in on the Arnold Bernhard library steps.

“Afterwards I looked on Yik Yak to see what the response was, and unfortunately a lot of it was overwhelmingly negative,” Jean-Jacques said. “[I saw] stereotypical things, things that were very offensive, things that–to me–reflected that a lot of folks are ill-informed and failing to see the bigger picture.”

This misinformed thinking affects African-American students such as Clark in negative ways, since she and other students face prejudice and stereotypes as a result.

“There have been times where I’ve felt discouraged being a part of BSU because everybody’s like ‘oh, that’s the Black Student Union, they’re all about black power,’” she said. “But it’s not; it’s about celebrating African-American culture and giving minority students a safe place to be themselves among people who they can relate to. I feel like if more people were comfortable to learn about us or to see what it really is like to be the minority in a situation, they would understand better.”

Sophomore Jessica Simpson has also been affected by this type of bias.

“People treat you like you’re the Rosetta Stone for black people, people treat you like you don’t have an individual identity,” she said. “I used the word ‘nigga’ in a poem [for class]…a white student got offended, and the professor wrote on my paper that it was too ‘street’. It’s like minorities can’t express their experiences and it’s not fair.”

Such experiences only accentuate the importance of Black History Month, according to Ariza, since OMGE’s programs allow people to learn from each other and get exposed to a different cultural environment.

“They prepare you to work in a diverse environment when you graduate,” she said. “And it’s guaranteed that it’ll be diverse, so if you’re going to help, heal or even sell products to a community different from your own, you have to be understanding of what that community is.”