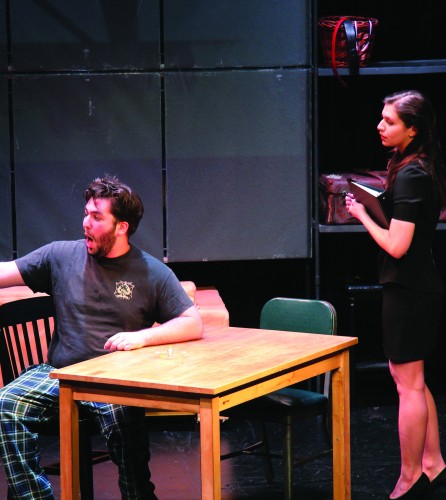 The curtains have closed on the second annual New Play Festival.

On Feb. 14, students performed their own productions in New York City. The festival was held in the June Havoc Theater located off Broadway.

The New Play Festival is an evening of seven one-act plays written, directed, and performed by Quinnipiac students with the support of the Abingdon Theater Company.

Each year the students work together developing a theme to focus on. The theme of this year’s festival was “The Cost of Living,” which explored the human condition and the values of everyday life.

“All seven [writers] had a different interpretation of what the cost of living meant,” said Kevin Daly, an assistant theater professor who oversees the Quinnipiac’s Theater for Community. “One play was a comedy about two slender guys who recently just finished probably what would’ve been their college years.”

Junior vice president of the Fourth Wall Theater Group Gerard Lisella wrote the play “Underscore” for the festival. He said he loved working with the theme this year.

“The wonderful thing about the theme was that it left a lot of interpretation up to the playwrights and we were able to enjoy an extremely    diverse collection of plays,” he said. “Some dealt with everyday life, some with death.”

Lisella explained the amount of thought that goes behind each play. When writing his script, he thought hard about the theme.

“Life is a very dynamic thing, and we must constantly make sacrifices. Some are minor and some are drastic,” he said. “But sometimes in life we have to sacrifice the things that mean the most to us, the things that we as individuals live for. And I wanted to explore at what point that cost is too high–if there is a point when choosing to live is not worth the cost we’re asked to pay.”

Abingdon Theater Company has partnered with Quinnipiac’s own Theater for Community to ensure that budding collegiate actors can find their spot in the limelight.

Abingdon helps the students –whether they be writers, actors, or even directors – better understand the creative process behind theater.

The company worked with students on the main stage production and also provided guidance before students started rehearsing. The fall semester involved writers turning ideas into scripts, and eventually into stage plays.

Junior film, video and interactive media major Alan Johnson wrote “Bored in the USA.” He mentioned the helpful dialogue between Abingdon and the students of Quinnipiac.

“We talked about how to improve our current plays, the creative process, and possible theater careers for after college” Johnson said.

Johnson said the payoff of seeing his script transform into a production is rewarding.

“As a playwright, my favorite part has to be seeing people laugh at jokes that I had written alone in my bedroom,” Johnson continued. “It’s completely surreal to see something that I wrote in my dorm room at 3 a.m., fueled by nothing more than Flamin’ Hot Cheetos and Dr. Pepper, be brought to life by fantastic actors, directors and stage managers in New York City in an Off-Broadway theater”

After reminiscing about the memorable performance, Johnson reached a conclusion.

“The New Play Festival is truly one of the best opportunities at Quinnipiac,” he said.