Rave: QU gets its own filter on Snapchat 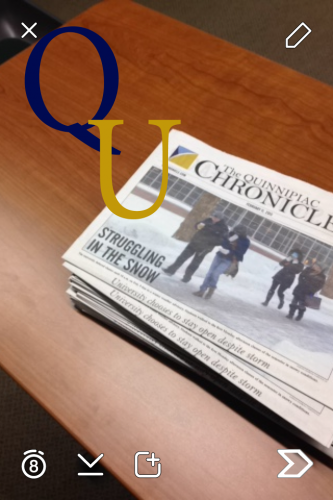 “Oh my gosh! Quinnipiac has a geofilter now!” Those are the exact words that I screamed when I got my most recent update for Snapchat. I am not kidding. Snapchat is notoriously famous for molding artsy and representative images into words that spell out famous places. Destinations such as Los Angeles, Disneyworld and the boroughs of New York City are prime examples. There is the obvious catch that an individual has to be in the featured location in order for the geotag to display as an option on Snapchat, but that is perfectly understandable.

However, Snapchat adding the QU emblem, complete with our school colors of blue and gold, was pretty darn exciting. The promotion of Quinnipiac takes many young people’s social media obsession to the next level. Most of us (commuters included) are stuck at Quinnipiac for a fair amount of time, so it is a good feeling to showcase our pride and truly represent Bobcat Nation in our everyday lives.

This new feature not only cuts down on the limited word count for captions (one does not have to explicitly say that he or she is at Quinnipiac, the geotag does it for him or her,) but also makes Quinnipiac as official of a location as New York City or Los Angeles. The QU geotag invokes a subtle sense of community within the student body. Maybe not as profoundly as the Yik Yak app does, but that unity is definitely still there. Our campus is always photo-ready and many of us have entertaining Quinnipiac-themed snapchat stories. The geotag is a smart and easy way to display things that are just “so QU.”