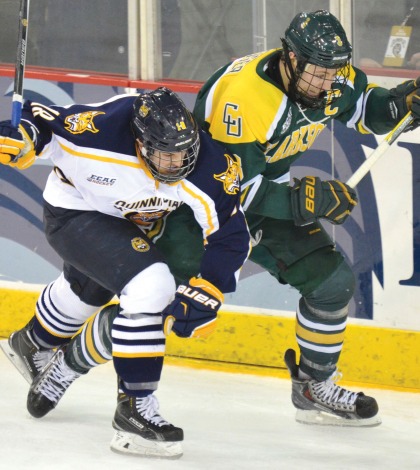 Most college hockey players see their biggest growth in skill and talent in between their freshman and sophomore years, according to Quinnipiac head coach Rand Pecknold.

There are always players that can be late bloomers, however. One of them is forward Soren Jonzzon.

“It just took him a little longer than some players to figure it out. He’s figured it out and it’s a huge reason for our success,” Pecknold said.

Jonzzon, the junior forward from Mountain View, Calif. has come from playing in just four games his freshman season to being a consistent offensive threat this year.

“He brought the team an edge this season which he didn’t bring in years past, and that has brought him success,” Pecknold said.

In Jonzzon’s eyes, that competitiveness came during the offseason in the weight room.

“The coaches said I needed to work on my grittiness, and that indirectly came through the weight room,” Jonzzon said. “That competitiveness carried over to the ice and the consistency came with it because I was doing it everyday.”

“[Patel and I] talked about attacking each workout and not going through the motions. I wanted to get stronger everyday and not waste a day,” Jonzzon said. “If I saw a guy doing a 10-pound workout, I was going to be doing 15. No matter what the situation is I am trying to be better than the guy next to me.”

Patel noticed improvement throughout the offseason. He saw Jonzzon go from just working out and going through the motions to starting to learn and understand how to train and to “win each session.” According to Patel, to win a training session means to bring intensity, passion, energy, urgency and a high level of attention to detail into every training session.

“He has really invested a great amount of time and focus into developing into a staple in our lineup,” Patel said about Jonzzon.

“He was just on a mission to help our team, and he had a personal thing going for him that he really wanted to make a difference,” Peca said.

After appearing in Quinnipiac’s exhibition against Acadia on Oct. 4, Jonzzon was selected to start in the team’s first home game of the year against Bentley. He assisted on the Bobcats first goal of the regular season, eventually leading them to a 5-3 win.

The last time Jonzzon didn’t see ice time in a game for Quinnipiac was on Oct. 18 vs. UMass Lowell, when he was a healthy scratch.

“I talked to coach and told him that I didn’t think I deserved to sit out, and he just told me to make him have no choice but for me to play,” Jonzzon said. “How things are going right now I feel I haven’t given him that choice yet. It’s just another way to make me strive.”

Since the UMass-Lowell game, Jonzzon has played in every game for the Bobcats and has tallied up 12 points, including five goals. One of them was a game-winner to complete a weekend sweep against Northeastern.

“Obviously getting a game-winning goal is awesome, but for me to bounce back and have a solid game, and get that goal back was an amazing feeling,” Jonzzon said.

This season, Jonzzon has been seeing time in important situations, whether it be late in regulation or on special teams.

Patel feels that the hard work from Jonzzon this past offseason has prepared him for important times in games when he is on the ice.

“I believe that the more you push your limits, boundaries and comfort zone the more comfortable you will be in different situations,” Patel said. “I think this is where Soren became more competitive.”

To Pecknold, Jonzzon’s competitiveness gets him minutes in such important situations.

“It is important to be competitive as a hockey player. When his compete level is high, he is a very effective player,” Pecknold said. “We need to have players like Soren to make us a good team with an edge. He’s reliable, he makes simple plays and he makes the right plays. He won’t wow you with his skill but he everything he does is for a purpose.”